Travel back in time on Llan Railway

Llangollen Railway's Winter Warmer gala weekend will be held over two days January 2nd and 3rd and will see a mixture of steam and diesel hauled passenger and goods trains.

During the weekend, a journey along the 10 mile heritage railway between Llangollen and Corwen will also be a journey back through the decades.

Stations along the line will be transformed to resemble different decades:

1930s at Berwyn: Visit the station in the gorge and experience the golden age of the Great Western Railway. Why not break your journey and walk over the oldest chain link bridge in the world?

1940s at Glyndyfrdwy: Learn about the role of railways during wartime. Don't forget to pick up your ration book! 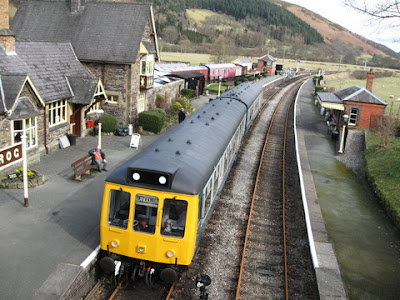 1950s at Carrog (pictured left) : The railway has been nationalised! See how the railway's appearance changed under public ownership and take a ride on the station's miniature railway (weather permitting).


1960s at Corwen East: Modernisation is in the air and Dr Beeching is planning to close the line. See some historic publicity and learn about how we are building our own new railway station. Children will be able to stamp their 'Travel through the Decades' passport at each station.
An intensive timetable will be in operation over the weekend, allowing plenty of time to explore the stations along the line.
Visitors can experience how rural branch line journeys would have been on-board our steam-powered Great Western Railway 'auto train', or see how post-war commuter travel would have been like in our Suburban carriages.
They can also travel on the demonstration parcels train and look out for newspapers and parcels being loaded and unloaded along the line.
* Full details and a downloadable events guide will be made available over the coming weeks from our website: http://www.llangollen-railway.co.uk/event/winter-warmer-2nd-january-2016/
Posted by llanblogger at 6:51 AM