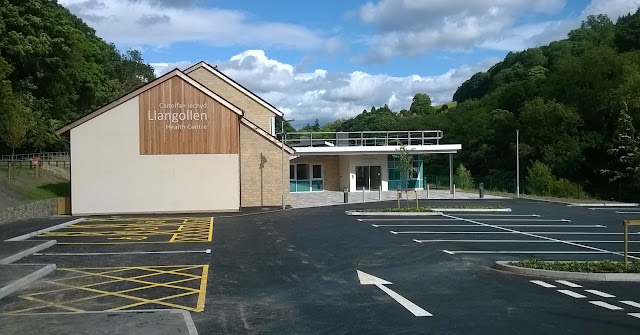 * The new Llangollen Health Centre where a pharmacy will eventually be based.

HEALTH officials are still in the process of deciding on an application to move the existing pharmacy in Regent Street to Llangollen’s new health centre.


A number of people have been asking why a pharmacy has not yet opened in the £5 million new facility in Mill Street on the site of the old River Lodge.
Llanblogger asked for a statement from the Betsi Cadwaladr University Health Board, which runs the health centre, and has received the following reply:


“Following the confirmation that the new primary care centre in Llangollen would be built, the health board received three applications to open a new pharmacy on the site, in addition to the existing pharmacy in the town.
“The board considered the applications for an additional pharmacy and concluded that this was not necessary to ensure that an adequate pharmaceutical service was available to the local population.


“As provided for in the national regulations which govern the application and decision making procedures, this decision was subject to appeal by the applicants and was referred to Welsh Government.
“Welsh Government dismissed the appeals and an application to relocate the existing pharmacy from Regent Street to the new primary care centre has now been received.


“The board is in the process of consulting prior to making a decision on this application as is required by the regulations.
“Comments on the application will be received up until December 4th 2015, after which a decision will be made.”
Posted by llanblogger at 2:13 PM