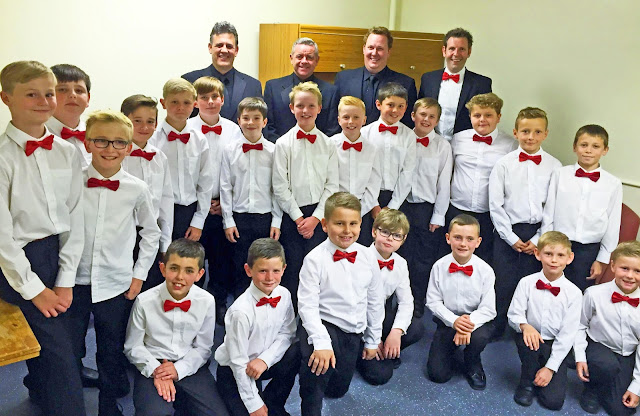 
A BOYS’ choir which sparked a chorus of approval when it sang at Llangollen International Musical Eisteddfod last year is returning to perform at the festival’s Christmas concert.
Rhos Boys’ Choir, the junior section of the world-famous Rhos Male Voice Choir, was only formed just over two years ago but has already attracted plenty of attention.
In only its second public appearance the 25-strong choir, for youngsters aged seven to 12, delivered a bravura performance during the awards ceremony for the Eisteddfod’s prestigious Children’s Choir of the World competition in July 2014.
On the strength of that showing the choir has now been invited back to the iconic Royal International Pavilion to appear at the Eisteddfod Music and Staging Committee’s annual Christmas concert on Sunday December 13.
On the big night, which starts at 7.30pm, they’ll join an impressive musical line-up including TRIO, a young, male ensemble from the heart of Snowdonia, and the Flintshire Country String Orchestra.
Founder of the boys’ choir and its musical director is Aled Phillips, head of music at Ysgol Dinas Bran in Llangollen and former musical director of Rhos Male Voice Choir.
He said: “We decided to set up the choir because we were keen to introduce younger boys to choral singing.
“We also believed that if boys developed a love for that kind of singing they might want to stay on and eventually join the full choir.
“The choir was formed and attracted a lot of interest. In fact, my own son, Tomos, who is now nine, was one of the first members and is still singing in the treble section.
“The choir rehearses each Thursday, from 5.30-6.30pm, at the Stiwt in Rhos and welcomes new members.”
The new choir’s first public performance came in the spring of last year when it sang during the annual St David’s Day concert at the Stiwt Theatre in Rhos and delighted a full house audience.
They appeared alongside the Rhos senior choir, which meant a number of the boys were sharing the stage with their fathers, grandfathers and uncles.
Next came the memorable appearance at the Eisteddfod when the boys performed the traditional Welsh folk song Sospan Fach and the Gary Barlow number, Let me Go, during the children’s choir awards presentation.
Last year had a grand finale for the choir when they recorded two songs for the senior choir’s Christmas CD, Noe! Noe!
In September this year the boys won further acclaim when they were invited to sing on the same bill as the famous Three Welsh Tenors – Rhys Meirion, Aled Hall and Aled Wyn Davies - in a concert celebrating the 20th anniversary of Nightingale House Hospice at Glyndwr University’s William Aston Hall.
And they’ll be back at the same venue on November 14 when they join the line-up of Rhos Male Voice Choir’s annual concert which also includes Portuguese tenor Luis Gomes and Caernarfon soprano Meinir Wyn Roberts, who won the Voice of the Future title at this year’s Llangollen Eisteddfod.
Their musical director Aled Phillips said after that the boys will be polishing up their performance for their Christmas return to the Llangollen Pavilion stage.
He said: “We’ll be singing four Christmas songs – two in Welsh and two in English – on the night.
“The Welsh ones will be Nadolig Llawen by Caryl Parry Jones and Mae’na Faban Bach by Robat Arwyn and the English songs are Mistletoe by Justin Bieber and Where Are You Christmas by Faith Hill which was used in the film The Grinch.
“Everyone in the choir is looking forward to being back on stage at the Pavilion in Llangollen after our appearance at the Eisteddfod last year when the response from the audience gave us a tremendous boost.
“It’s going to be a great start to Christmas.”
This will be third year the Eisteddfod’s Christmas concert has been held and the event has rapidly become a popular and eagerly anticipated date in the festival’s calendar.
Hosted by sports commentator and High Court judge Nic Parry, a familiar face on the main stage during Eisteddfod week, it will also showcase the talents of TRIO, a young, male ensemble from Snowdonia.
The threesome, who have recently released their debut album of the same name, describe themselves as a “new singing experience” and have a broad, bi-lingual repertoire.
Also appearing are the Flintshire Country String Orchestra, conducted by Aled Tudor Marshman, part of the highly successful Flintshire County Youth Music School which was established in 1996.
In recent years, the orchestra has performed at a host of events across the UK and Europe and has also competed at the National Festival of Music for Youth, which is Europe’s largest music event of its type.
Elen Roberts, chairman of the Eisteddfod’s Music and Staging Committee, said: “The programme for this year’s concert is bursting with a mix of seasoned performers and rising talent and promises to be a real Christmas cracker.
“I know all of the performers are saying they are delighted to be taking part in this festive celebration of music and we look forward to welcoming them, and indeed our audience, in Llangollen.
“We are delighted to be featuring such home-grown talent as the Rhos Boys’ Choir which has achieved so much in the short time since it was founded under the brilliant direction of Aled Phillips.
“It’s also good to be presenting the Flintshire String Orchestra with which I have been closely associated through my own work with the Flintshire Music Service.”
For more information or to buy tickets to the concert, visit the Llangollen International Musical Eisteddfod’s website at www.international-eisteddfod.co.uk.

* Tickets are priced at £10 (concessions £8) and can also be purchased directly from the box office at the Pavilion, or from Llangollen Tourist Information Centre.
Posted by llanblogger at 6:57 AM