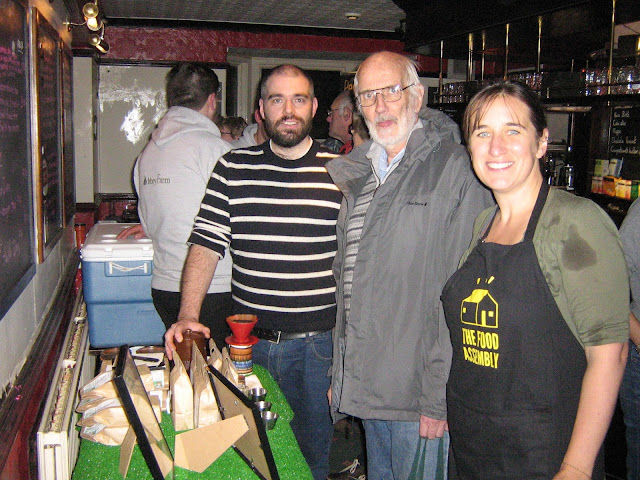 LLANGOLLEN is the first town in Wales to launch a completely fresh way of buying food.

The area’s new Food Assembly is an online service that brings people together to buy food directly from local farmers and food producers.

Customers in Llangollen can order food online before picking it up weekly at a local pub, the Ponsonby Arms, where the assembly was officially launched last night (Wednesday).

All the food comes from within around 26 miles of the area, meaning that for every £1 spent, 90p stays in the local economy.

There will also be plenty of pastries, artisan bread and other local and seasonal goodies.

Community is at the heart of the food assembly – it connects neighbours to farmers, neighbours to each other, and everyone to their food.

The initiative is organised by Robyn Lovelock from the town who said: “Llangollen is the first town in Wales to have its own food assembly.

“The launch event was very successful and we signed up 40 people on the night. We’ve also had lots of interest on our website.

“While we have some fantastic locally produced food in the area, it can be difficult to find in one place and to buy outside of working hours.

“I’m excited that the food assembly will bring some together local farmers and producers with customers keen to buy fresh, tasty local food and other products.”

She added: “I hope the idea will bring another dimension to food options in Llangollen, supporting its Cittaslow slow food status and adding to the great selection of restaurants and delicatessens already here.”

At last night’s launch event local customers had the chance to meet farmers, food makers and their neighbours, taste local food samples and see where their food comes from.

Among the half dozen or so producers present was Mike Ford, owner of Pen-y-lan Pork based at Crabtree Farm, Eyton.

He said: “I’m delighted to be involved in the food assembly which I think is a great idea.”

Mike, who recently met Sir Terry Wogan when he visited Chester during filming for his recent TV series touring Britain in a London cab sampling its local food, added: “All our products are produced using only the finest local ingredients and I’m glad to be offering them in this new way to the people of Llangollen.”

* For more information and to register as a customer or producer, go to www.thefoodassembly.com and search for Llangollen, or call Robyn on 0779 9896108.
Posted by llanblogger at 6:47 AM