A police boss has made a final plea to the Government to abandon further cuts to policing in North Wales in the wake of the terror attacks in Paris.
Julian Sandham, the Deputy Police and Crime Commissioner for North Wales, was speaking ahead of the Comprehensive Spending Review that's being announced tomorrow (Wednesday, December 25) by Chancellor George Osborne. 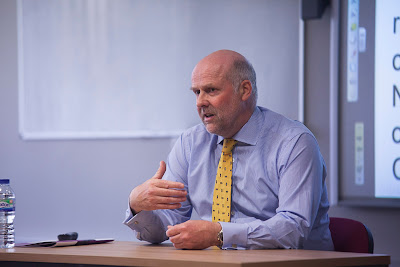 Over the past four years North Wales Police has had to make £24 million in savings to meet Government spending targets.
At the same time crime in the area, excluding fraud, has been cut by three per cent.
North Wales Police is the only force in Wales where crime has been reduced - all the rest have experienced increases.
But, according to Mr Sandham, (pictured) the terrorist atrocities in Paris changed everything.
He said: "The terror attacks in Paris have certainly changed things and I would urge the Government to pause and reflect before imposing any more policing cuts.
"It is important to consider the implications for neighbourhood policing which is the first step in any intelligence gathering operation.
"The new level of terrorist threat can affect forces similar to North Wales as well.
For example, if you had a major incident in London which required lots and lots of extra policing, as it inevitably would, then the Metropolitan Police could not supply all those police.  The other police forces would have to assist.
"So no matter where the major incidents of the Paris kind were to occur, the neighbourhood policing of all the forces of England and Wales would be affected in the sense that the number available within their own forces would be reduced on account of deployment to London.
"Also, so far as North Wales is concerned, the Holyhead port is a gateway in and out of Britain and the ease with which you can get flights in and out of Dublin, makes Holyhead a very attractive port from that point of view and coupled with that is the A55 for easy access from North Wales the to the densely populated areas of the north west of England or a train to London of course.
"So the need for vigilance around the port and effective scrutiny of the legitimacy of those who are coming in through Holyhead is very much a matter for North Wales Police, very much so.
"Anglesey is a very special case in my opinion because it’s about to experience considerable change in its socio-economic pattern from the building of the second Wylfa nuclear power station, from the large scale residential development that’s just been granted.
"The influx of the labour force to build Wylfa Newydd will of itself create a policing demand.
"The fact that you’ve got a nuclear power station on your patch also influences the risk factors and will have to be taken into account in the kind of policing pattern you employ within that area.
"There is an opportunity now not to implement further significant cuts and I am hoping this is recognised and acted upon."
Posted by llanblogger at 4:13 PM