One year from the Battle of the Somme centenary, North Wales Assembly Member Mark Isherwood is urging North Wales communities to apply for new Heritage Lottery Fund (HLF) money to explore the impact of the war. 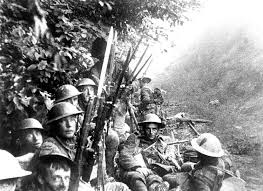 Following the phenomenal success of its community grants programme ‘First World War: then and now’, HLF has made an additional £4million available in 2015/16 for communities looking to explore, conserve and share local heritage of the First World War.
Grants are available between £3,000 to £10,000.
Thanks to National Lottery funding, thousands of young people and communities throughout Wales have already been involved in activities marking the centenary such as: researching and recording local heritage, conserving and finding out more about war memorials and using digital technology to share the fascinating stories they uncover.
An Assembly event today showcased just a handful of 79 First World War Centenary projects taking place across Wales, thanks to more than £5million of investment from HLF.
This new money will help even more people get involved to explore a greater range of stories including those surrounding the Battle of the Somme.
Mr Isherwood said: “It’s so important that we remember the impact of this war one hundred years on. There is still time to apply for National Lottery money and I would urge anyone in North Wales with an idea for their own project to get in touch with HLF.”
Sir Peter Luff, Chair of the HLF, said: “The demand for National Lottery funding for First World War projects has been phenomenal, so much so we’ve decided to make extra money available. This will mean everyone, in particular more young people, can explore the momentous events of a war that shaped our nation, Europe and the world. Next year marks the centenary of the Battle of Somme and if groups want support for projects in 2016, they need to start thinking about applying now.”
* More information on how to apply for HLF funding is available at www.hlf.org.uk
Posted by llanblogger at 3:29 PM