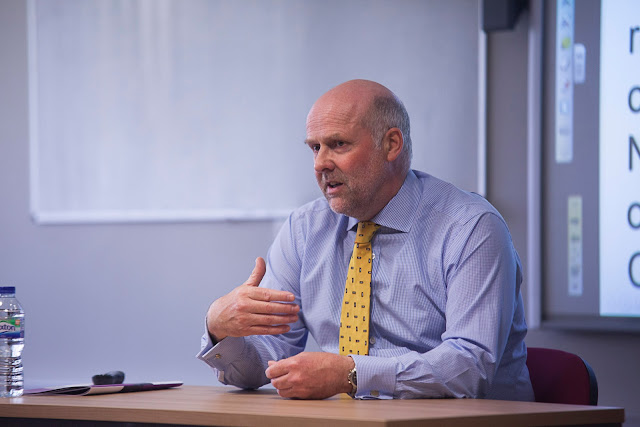 * Julian Sandham, Deputy Police and Crime Commissioner for North Wales.
The Chancellor’s decision to rule out further cuts to the police budget in his Autumn Statement has been welcomed as a victory for common sense by Julian Sandham, the Deputy Police and Crime Commissioner for North Wales.
George Osbourne defied expectations when he told the House of Commons that there would be no further cutbacks in the police budget and promised real terms protection for police funding.
A relieved Julian Sandham said: “We welcome the Chancellor’s decision to rule out further cuts to the police budget, especially in the light of recent events in Paris.
“This is a victory for common sense because the Chancellor has done the right thing and without this our approach to security wouldn’t have been coherent.
“We now need to look at the fine detail of what the Chancellor has said before we receive the grant settlement in December.
North Wales is a special case for a number of reasons. We have a major port in Holyhead which handles over two million passengers a year and over 300,000 lorries and the prospect of a new nuclear power station.
“Clearly, we still need to consider aspects of the terror attacks in Paris – specifically the need to consider carefully the implications in respect of neighbourhood policing.
“The flow of intelligence is important and neighbourhood policing teams gather this intelligence and are best able to do so because they are closer to their communities.”
The Police and Crime Commissioner for North Wales is about to embark on a series of consultation meetings across the region and Julian Sandham added: “North Wales Police have coped with £24 million in cuts over the past four years and is now a leaner machine in consequence but it isn’t a less effective or less efficient machine.
"The force has an excellent track record in fighting crime and is the only force in Wales where crime has been reduced.”
"Our focus now moves to a series of meetings where the Commissioner and I will seek the views of local people in communities across north Wales  to inform the priorities to be included in the Police and Crime Plan which will be the blueprint for policing the region.
"Their views will also be important and I would encourage people to take part in this process.
"For those who are unable to attend any of the meetings, we have an online survey so they can make sure their opinions are heard. People can also request a hard copy survey from the office or phone the office and give us their views."
Posted by llanblogger at 6:34 PM