Young 'Uns turn in monster of a show 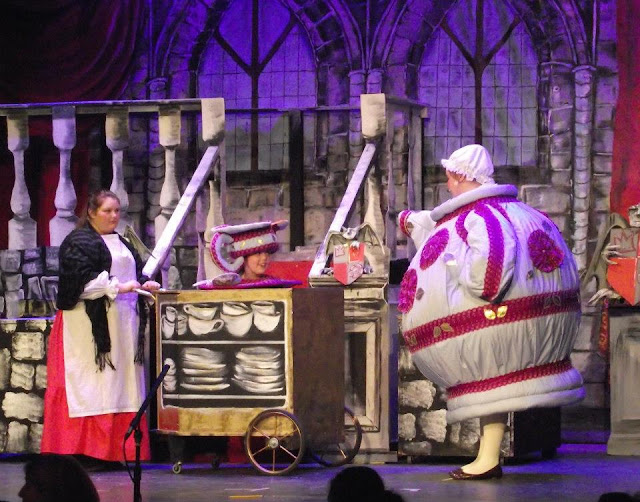 * A scene from the Young 'Uns production of Beauty and the Beast.


A talented cast from Llangollen Operatic Society’s junior section, the Young ‘Uns, turned in a monster of a production of of Disney musical Beauty and the Beast for three nights at the Town Hall, from Thursday-Saturday.
Saturday’s capacity audience was entranced by the fairy tale of the handsome prince turned into a hairy critter with attitude by a vindictive witch, who makes a triumphant return to humanity thanks to the love of a good woman.
The guy with extreme anger management issues, big-time facial hair and a mane of hair like a 70s rock star was superbly played by Wilf Wort who expertly turned snarls to simpers after developing a crush on the Beauty of the title, Belle. She was portrayed with great sensitivity by Jessica Cockburn.
But it wasn’t just the prince who fell victim to the wicked witch’s powers. The old crone also turned the staff at his castle into a range of domestic oddities, including a big talking teapot, a chatty candelabra, a walking wardrobe, a speaking clock and a big feather duster, all of whom can only become human again if their master falls in love.


These animated household objects provided a big slice of the action, a lot of the singing and  a fair bit of the humour of the piece.
They were masterfully interpreted by, respectively, Louise Cielecki and Nathan Lloyd – two Young ‘Uns stalwarts who are consistently brilliant in every role they take on – a sparkling Polly Harrison, a marvellous Meg Howlett and Carys Stallard, who provided plenty of French ooh lah lah.
Gaston, the creepy egomaniac who fancies Belle himself and therefore does his best to ruin her budding romance with the Beast, was played to perfection by a strutting Nathan Hughes.
He got the most mileage possible out of lines like, “Belle and I would be a perfect match – like my thighs”.

As Maurice, Belle eccentric father, was the extravagantly bewigged Adam Goff, who is always good value for money.
As usual, the principal cast members received strong backing from a massive number of chorus members ranging from teens to tinies who all put loads of enthusiasm into their roles of whatever size.
Behind the stage was another army of helpers who handled everything from costumes and make-up to choreography and lighting.
Particularly impressive were the sets, created and painted by another large team of back-stage magicians headed up by Emma-Jo Newton, who was also stage manager. The labyrinthine archways of the beast’s castle were particularly realistic looking.
Musical direction of a four-strong live orchestra was under the capable baton of Elen Mair Roberts and the whole show was a credit to co-producers Tess Orton-Jones and Michael Jones and artistic co-directors Deirdre (D) Smith and Bethan Williams.
·        Llangollen Operatic Society’s next production is Anything Goes, at the Town Hall from April 16-20.
Posted by llanblogger at 12:45 PM