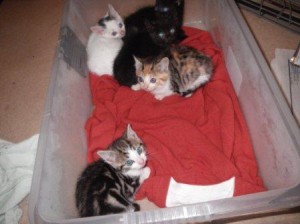 The RSPCA is appealing for information after five kittens were found in a sodden cardboard box between Rhos and Penycae near Wrexham.

The animals were discovered by a member of the public on a footpath on Tuesday, January 29, who gave them shelter by taking them home.

Th eight week old kittens were sealed in the box which was disintegrating as a result of heavy rain.

RSPCA inspector Kia Thomas said: “It beggars belief that someone could be so heartless as to dump small kittens like this. It’s vital that we hear from someone who may know something about this incident."

Anyone with information should contact the RSPCA inspectorate appeal line on 0300 123 8018.

All calls are treated in confidence.

To help the RSPCA investigate cases like this, you can give £3 now by texting HELP to 78866 (Text costs £3 + one standard network rate message).
Posted by llanblogger at 11:03 PM