The former royal harpist who enchanted Prince William and Kate Middleton at their wedding reception is looking forward to her own dream date in North Wales.
Talented Claire Jones, 28, can't wait to take the stage at the "extra special" Llangollen International Musical Eisteddfod, the global festival of music and dance.
Claire, who hails from Pembrokeshire, was appointed Official Harpist to His Royal Highness, the Prince of Wales in 2007. 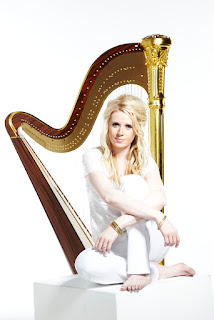 She held the role until 2011, making her the longest serving Royal harpist to date.
Prince Charles was so impressed that he extended her duties for an extra year - and sent her a wedding present when she got married.
As part of her duties, Claire (pictured left) regularly performed for the Royal Family and their guests at the Royal palaces and one of her biggest thrills came when she was the star of an exclusive lunch reception for 600 wedding guests at Buckingham Palace.
Fresh out of the Royal College of Music, Claire was hardly prepared for the media clamour that would engulf her as result of the royal wedding.
She said: “Playing for Prince William and Catherine on their wedding day was the biggest performance of my life. The atmosphere in the palace was amazing and I was playing in a room with just the Royal Family, the Middletons and selected guests present.

“I was made to feel part of the occasion and not just someone brought into perform. And of course, I had the chance to chat to many of the Royals who were very complimentary.
“Catherine was absolutely amazing, stunningly beautiful she came and had a chat, not just for a minute but a full 10 minutes and this was on her wedding day when the eyes of the world were upon her.

“I suppose, being in a private room surrounded by family and with no TV cameras present she felt relaxed, she certainly gave me the impression she was completely at ease.”
Speaking at her London home, she said: “I have played on the main stage at the Llangollen International Eisteddfod once before, as part of the opening ceremony in 2007. So to go back for a gala performance will be absolutely magical.

“I grew up in Pembrokeshire and Llangollen Eisteddfod was something we all, as a family, followed. It’s a massive event. It’s something we all aspire to, so to basically have the stage to myself, will be a memorable and magical moment in my career.”
Among the other stars performing at the International Eisteddfod this year, are Jools Holland’s Rhythm and Blues Orchestra, English soprano Claire Rutter, Kiwi bass Jonathan Lemalu and the choir Only Men Aloud who shot to fame on the hit TV show, Last Choir Standing.
Claire will be performing in concert on Wednesday, July 10, with popular American tenor Noah Stewart and top percussionist Evelyn Glennie.
Despite Claire taking up the harp at the age of 10, it wasn’t her first instrument when she began studying at London’s Royal College of Music (RCM).

“The harp was my second choice and the violin my first instrument”, she says, almost apologetically, “I started learning the violin aged eight a year after I had started piano lessons.

“However, at the RCM it became clear, as I was getting more requests to play the harp, that the instrument had almost chosen me rather than me the instrument.

“My tutor, Ieuan Jones, who actually comes from North Wales and grew up very close to Llangollen, took me to one side and told me I could play the harp to a very high standard and could, in his opinion, become a soloist.

“Uniquely, I was still playing the piano, violin and harp for a long time and certainly up to the age of 18. I knew I wanted to be a soloist but just didn’t know with what instrument!”

However, getting the call and being offered the opportunity to become harpist to His Royal Highness the Prince of Wales, certainly helped Claire finally make the choice that she would concentrate on the harp.

Claire cherishes every moment of her four years as Royal Harpist.

She said: “It was such an amazing experience, something on a different level really. I played privately for the Queen and had at last four engagements a month, whether a private dinner parties for 100 people Prince Charles was hosting or state banquets.

“It was just such a special time in my life. And of course Prince Charles’ own harp is something to behold. He has a Victor Salvi gold leaf harp complete with dragons and his initials. I would say it’s priceless.

“My own harp, which is really top-of-the-range costs £40,000, but I did enjoy playing Prince Charles’ harp. I am very much attached to my own instrument but his gold harp, well it’s just divine.

She added: “The biggest shock after playing for the Duke and Duchess of Cambridge on their return to Buckingham Palace was the media coverage it generated.

“It was insane, I ended up doing back to back interviews with American television stations and even playing live to an audience of millions which was somewhat nerve-wracking.

“Then, of course, there was British television, French, German, Spanish even Japanese stations, it really was crazy and I was a bit unprepared for it.”

And following on from the Royal Wedding, Claire soon had wedding news of her own.

Three weeks after she played at Buckingham Palace, her long-term partner, Chris Marshall, got down on one knee and proposed to her at the base of Christ the Statue, in Rio de Janeiro.

She said: “It was so romantic. Obviously we had talked of marriage and we had agreed we would marry but I wasn’t in charge of when I don’t suppose! When we did get married Prince Charles sent us a lovely gift and a letter of congratulations.

“In fact he writes on a quite regular basis to see how I am getting on, in fact it’s my turn to write back. And Catherine sent me some personal pictures from her wedding day which I will always treasure.”

And with her husband being an accomplished percussionist and composer in his own right Claire says it’s a marriage made in heaven.

She said: “I recorded my album, The Girl With The Golden Harp, which Chris arranged and even wrote some of the music for. I am delighted with the album which reached number three in the classical music chart.

“I like to think of myself as an ambassador for my country of birth, classical music and for my instrument. And believe me, I can think of no better place to showcase all three than the Llangollen Eisteddfod stage - I really am excited and can’t wait.”

To book tickets and for more details on this year’s event go to the website at www.international-eisteddfod.co.uk and on Facebook at www.facebook.com/llangollen
Posted by llanblogger at 8:06 AM