llanblogger man Phil Robinson recalls his recent cruise on the same ship involved which was in a tragic accident yesterday afternoon ... 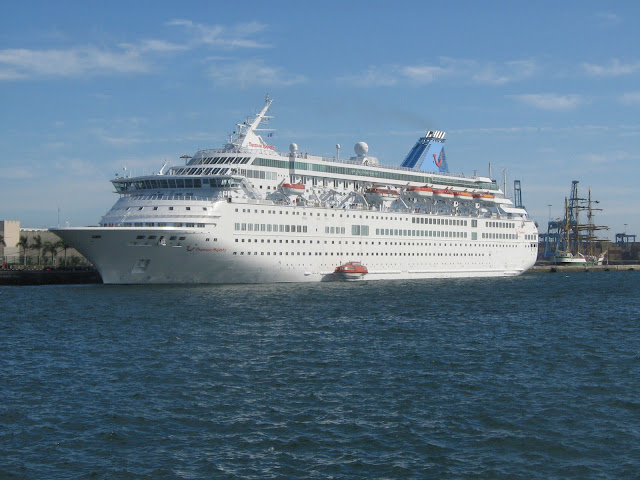 * The Thomson ship Majesty in port during a Canaries cruise over Christmas.


As on most cruise ships these days, it’s a case of safety first – and second and third – aboard the Thomson Majesty.
I know this is the case because I was a passenger aboard her on a trip around the Canary Islands over Christmas.
Given this huge emphasis on safety, it was quite a shock to hear the tragic news that five crew members had been killed and another three injured during what should have been a routine safety exercise yesterday (Sunday) afternoon.
It is understood that one of the ship’s large motorised lifeboats, which are stored at regular intervals right around one of the upper decks, fell into sea during the drill which was being held while the ship was docked in the port of Santa Cruz de le Palma – a place I visited on a similar cruise aboard the Majesty.
Passengers are said to have looked on in horror as vain attempts were made to rescue the men who died, who included three Indonesians, a Filipino and a Ghanaian.
Apart from the trauma for their family and friends, this tragedy will come as a terrible blow to their fellow crew members who pride themselves on following safety procedures to the letter.
Within minutes of coming aboard passengers must take part in a compulsory lifeboat drill.
And, unlike air travel, that doesn’t mean looking on bored or continuing to read a magazine as a cabin crew member goes through the crash landing procedure.
It means going to the trouble of finding and strapping on a cumbersome life jacket, working out where your allotted lifeboat station is located, trekking up flights of stairs – no lifts allowed – and slogging along endless decks until you meet up with a few score of other bewildered passengers, have your name checked off a list and are finally dismissed.
Sounds like a lot of fuss – and it is. But far better this way than what I might describe as the “Titanic alternative”.
It is cruelly ironic that crew Majesty members, who go out of their way to assist you and ensure your safety during such an exercise, have now been killed and injured taking part in something which sounds very much like the one I took part it just a couple of months ago.
Posted by llanblogger at 10:32 AM