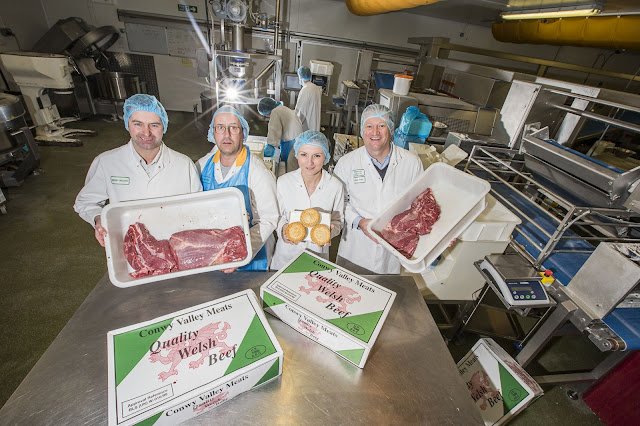 * True Taste Champion Robin Jones, Managing Director of Village Bakery, with some of his staff and the locally sourced meat that goes into their products. From left, Kerry Wilson, pie room production manager, Neal Hughes, cook room supervisor and Wioleta Mojzuk with Robin.


A food ambassador is urging Welsh companies to buy local in the wake of the horsemeat scandal.
The plea has come from Robin Jones, the current True Taste Champion of Wales, who is also Managing Director of the award winning Village Bakery.
He revealed the Village Bakery is putting up posters in all its shops - in Llangollen, Wrexham, Rhos, Hollywell and Ruthin - to highlight that they use only locally sourced meat in their pies.
The boss of the family firm says it's vitally important to reassure their customers in the wake of the negative headlines spreading across Europe.
Mr Jones said: "We are extremely proud of our local sourcing policy that's been in place for many years.
"We know exactly where our meat comes from every week and we can name the individual farms in the Vale of Clwyd and the Conwy Valley who supplied us this week.
"We don't buy mince or re-conformed beef. We buy proper cuts and do all the butchering ourselves so that we can be sure exactly what we're getting and that the quality is 100 per cent right.
"We guard our reputation jealously and this is the only way that we can maintain our high standards.
"I suspect many other companies will be looking to source their meat locally in future as a result of the news about horsemeat being found in beef products.
"We have always fully understood the importance of provenance and traceability to our customers and to our business.
"We pay a premium for our meat because we want our customers to have the best quality possible. For us quality is king.
"Given the current headlines, we felt it was important to remind and reassure our customers that our pies contain 100 per cent quality meat.
"Traceability has never been more important than it is today and I would urge Welsh food companies to buy local produce as ingredients whenever they can."
Mr Jones is one of the most respected figures in the UK food industry and in 2010 was named as British Baker of the Year at the Baking Industry Awards.
The Village Bakery makes premium breads, morning goods, savouries and bespoke products for major supermarket chains and their own shops and cafes.
The main bakery is in Minera and in 2008 they opened the most modern gluten-free bakery in Europe as part of a deal with the Swiss giant, the Hero Group.
The£3 million state-of-the art Village Bakery (Nutrition) Ltd on Wrexham Industrial Estate was officially opened by the then First Minister of Wales, Rhodri Morgan AM.
Then just over a year ago the company invested £7 million in the third bakery when they took over a 30,000 sq ft unit next door to the gluten-free bakery.
Originally, the aim was to employ 30 people but in the event we've recruited more than 40, taking the total workforce over the 250 mark.
Mr Jones added: "When I bring major retailers into the business, they know that the traditional craft skills are at the core of our business. It shines through and it sells the product to them. We're not just selling them a pie or a sausage roll, we're selling them the story of the Village Bakery and our craft tradition and culture.
“We produce a product that’s local, it’s manufactured in Wales –and our local sourcing policy means we’re also benefitting our suppliers.
"That means we can cut back on the food miles while helping to boost the local economy at the same time.
"Buying local makes so much more sense - whichever way you look at it."
Posted by llanblogger at 8:00 AM