New season gets under way at Llan Station 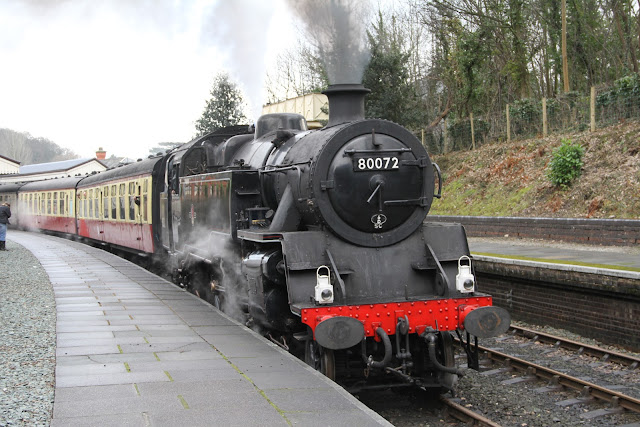 * The first steam train of the season departing Llangollen on Sunday
with Standard tank No.80072. 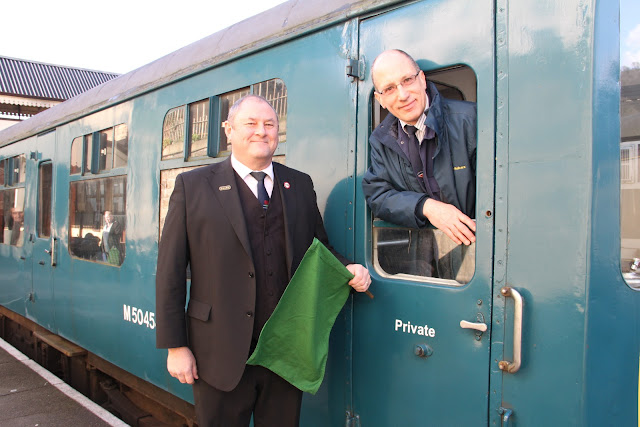 * The conductor and railcar driver about to despatch the first train
of the season away from Llangollen on Saturday.
Saturday saw the start of a new season of train services on the heritage line with the departure of the 11.15am from Llangollen.
The heritage diesel rail car was in use for this off-peak service which only ran as far as Glyndyfrdwy due to the riverside landslip west of the station.
Pending completion of an insurance claim the appointment of contractors to tackle the repair is awaited.
It is hoped that the repair work will commence shortly and allow train services to resume over the full length of the line to Carrog by Easter.
A steam service ran on Sunday when the British Railway Standard tank No.80072 was in operation.


The engine is booked to go on a visit to the North Norfolk Railway at Sheringham followed by a guest appearance at Minehead on the West Somerset Railway.
On Sunday afternoon, the railway had a visit from 50 students from the University of Central Lancashire who had been staying at Ty'n Dwr outdoor centre Llangollen.
Most of the students were from South Korea and are studying languages.
George Jones, for Llangollen Railway, said: "The brilliant blue sky on Saturday provided excellent weather for the first day of train operation.
"Those taking the railcar down the Dee Valley enjoyed the all round view which it provides to gain extensive vistas of the countryside at a time when there are no leaves on the trees.
"The first day of the season provides a shake down opportunity for staff to get back in the routine of train operations after the post Christmas closure which has seen essential engineering work tackled in places."
Next weekend, February 9/10, will be A Day Out With Thomas TM event, which will be followed by four days of normal train services during the school half term week culminating in a three-day Thomas event from Friday-Sunday, February 15, 16 and 17.
This will be the first of the Day Out With Thomas events on heritage railways in Britain this year.
From then on train services at Llangollen will operate at weekends through to Saturday, March 23,  which is a diesel gala day when the fleet of heritage diesel locomotives will be put thr ough their paces.
Posted by llanblogger at 8:02 AM