A top North Wales police officer is backing the Government's new compulsory micropchipping of all dogs.

The new measure comes in on April 6, 2016, along with the extension of laws on dog attacks to cover private property.

North Wales' Assistant Chief Constable Gareth Pritchard, (pictured below right) who is Association of Chief Police Officers lead for dangerous dogs, said: “It is in society’s interest to tackle the problem of dangerous dogs and irresponsible ownership and the Government’s announcement will greatly improve this area and enhance public safety. 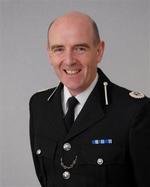 “This is not only due to the serious physical harm and intimidation that occurs but also the effect it has on our communities.
“The extension of the law to cover dog attacks on private property is essential to protect members of the public who have legitimate access to premises such as postal workers, nurses, midwives and others. It also offers greater protection to the wider public, including children and other vulnerable members of our communities.
“The police service spends several million pounds on long term kennelling, which is a significant drain on police resources and can have a detrimental effect on the wellbeing of the animal.
"Under the new measures, police will now be able to decide if the retention of a dog is necessary whilst court proceedings are being conducted under the Dangerous Dogs Act.
"This decision will be made by individual police forces who will take into consideration the requirement to maintain public safety, secure and preserve evidence, and act in the interests of the animal and its owner.
“Compulsory microchipping will assist in tackling the environmental and welfare issues of stray dogs, by assisting local authorities and the charitable sector to re-unite dogs with their owners expeditiously when lost or stolen.
“We note the Welsh Government is in the consultation phase on its dog control proposals and we are also in discussion with the Ministers’ officials.”
Posted by llanblogger at 4:12 PM