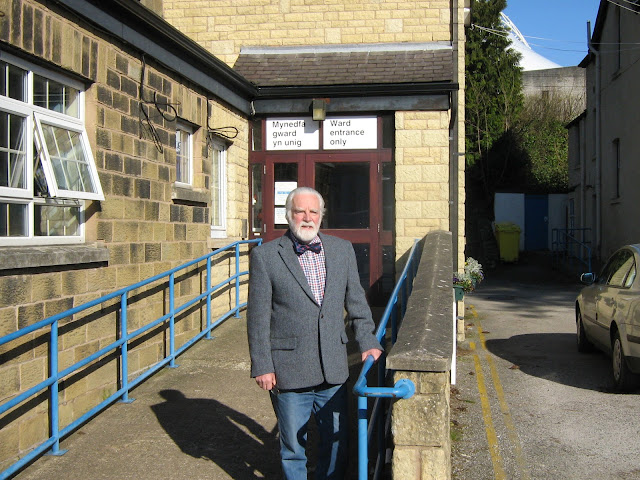 * Commodore Ronald Warwick outside Llangollen Cottage Hospital where he was born in 1940.
The former captain of world-famous cruise liner the Queen Elizabeth II (QE2)  this week made a sentimental journey to Llangollen to visit the place where he was born over 70 years ago.
And this will probably be the last time Commodore Ronald Warwick has the chance see it as a working unit as the town’s historic Cottage Hospital is due for the axe as part of a controversial shake-up of services across North Wales by the Betsi Cadwaladr University Health Board (BCUHB).
Commodore Warwick, 72, who also captained the Cunard liner Queen Mary 2 before his retirement in 2006, was staying in the area for a few days with friends Ken and Carol Mascarenhas who run the Abbey Dingle nursing home in Llangollen.
Top of his list of places to visit was the 137-year-old hospital in Abbey Road where he was born on November 28, 1940.
Commodore Warwick, who lives in Somerset, recalled that at the time of his birth his mother, Evelyn, had been evacuated to the safety of Llangollen from her home in Liverpool to avoid the bombing of the city at the start of World War Two.
Liverpool was the home of his father Commodore William Warwick, who was also famous as the first captain of the QE2 and at the time was serving with the Royal Navy Reserve.
Commodore Warwick said: “When she was evacuated to Llangollen my mother was living at her mother-in-law’s home in Liverpool, which became dangerous because of the bombing.
“At the time I was born in late 1940 she was living at number 6 Dee Mill Place, which I believe is no longer there.
“I’m not sure whether she was living there with a family member but I know that at some stage she did live with her aunt and uncle, Rupert and Liza Crosher, at Cherry Tree Farm in the Pengwern area of Llangollen.
“I was born at the Cottage Hospital in 1940 but I don’t think my mother stayed in the area for very long after that.
“One of my earliest recollections is going back to the farm to visit my relatives at the age of five. “
He added: “While I have been staying with my friends Ken and Carol I thought I would take the opportunity of visiting the hospital.


“I think this could be my last chance of going there while it is still a hospital as I understand it is due to close soon.
“It’s sad that hospitals in general have to close. I can’t say I approve or disapprove of the plan to close the Cottage Hospital because I don’t really know much about it.
“However, it was nice to go there and see where I was born.”
Commodore Warwick, who was invited to speak to members of the local Rotary Club about his career on Monday evening, went to sea at the age of just 15 and served in various roles aboard a wide variety of ships.
After joining the Cunard line in 1970, he served in various ranks on the QE2 and was the ship’s chief officer for a number of years, which included the period when the liner was requisitioned by the British Government for service as a troopship in the Falklands Campaign of 1982.

Commodore Warwick was appointed to command the Queen Elizabeth 2 in July 1990.

At this point in his career he made Cunard Line history by sailing in command of the same ship as his father who was the first master of the QE2 before he retired in 1972.


Commodore Warwick later went on to command one of Cunard’s latest super-ships, the Queen Mary 2, from 2003 until his retirement three years later.
Posted by llanblogger at 4:27 PM