Maps show levels of noise in the area 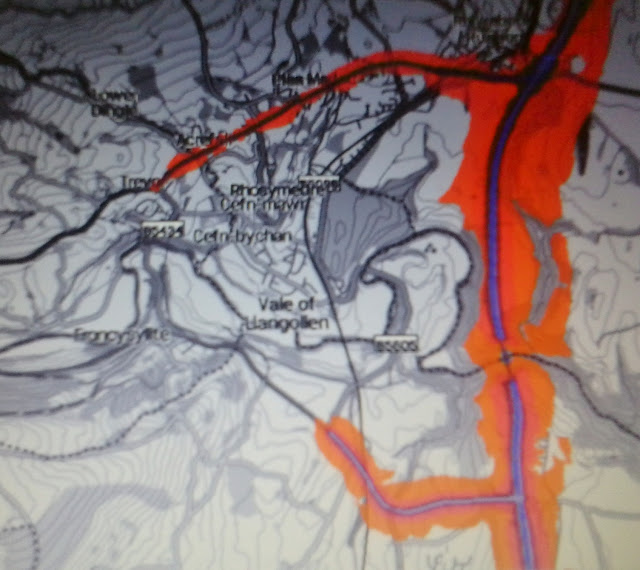 * The local noise map, showing the A539 junction with the A483 at the top and the
A5 junction at the bottom.

The Welsh Government has published a series of maps to illustrate levels of noise across Wales.
The noise maps show estimated levels of road traffic, railway and industrial noise in Wales’ three largest urban areas, and noise from the busiest roads and railways across the country.
Local authorities, and other bodies, can use the maps to identify where high levels of noise coincide with other social and environmental problems. They will then be able to address these issues to improve the quality of life for people living and working in there areas.
Commenting on the maps, Environment Minister, John Griffiths said:
"One of my top priorities is to improve the local environment for people living in our most disadvantaged areas. Noise pollution should be treated with particular seriousness when it coincides with other factors such as poor air quality, low housing standards and lack of green space."


One of the maps looks at noise generated by trains. Almost all mapped railway lines are due to be electrified and the Welsh Government is looking at the improvements in noise levels likely to result from this.
The Welsh Government will shortly be consulting on a noise action plan which will bring together the noise policies and priorities of public authorities across Wales. The noise maps will be a key source of information helping to inform decisions by these bodies over the next five years.
You can see the noise maps on our Wales Noise Mapping website.
Looking the road noise mapping for this area the key to the colours on the map, representing average noise level in decibels (dB), are:
·        Blue - 75 and over
·        Purple - 70-74.9
·        Red - 65-69.9
·        Pink - 60-64.9
·        Orange - 55-59.9
Locally, the highest noise levels (blue) is recorded along the line of the actual carriageway of the A483, with progressively lower noise recordings (purple, then red, pink and orange) on the roadsides along its flanks.
On both the main roads from the bypass to Llangollen – the A539 in the north and the A5 in the south – the highest noise levels are recorded on the eastward carriageways themselves - (purple) diminishing to red.
Again, on the sides of both roads there are extensive orange areas, extending as far west as Trevor on the A539 – where the road then becomes red all the way to Llangollen and beyond - and the junction with the B5605 towards Pentre on the A5.