* Campaigners, including the Llangollen contingent, gather outside
Lesley Griffiths' Wrexham office. Below left, lobbyists knock on the door.


Llangollen campaigners played a key role in a mass lobby of Wales’ Health Minister Lesley Griffiths against plans to shake-up NHS services in the region.
And Ms Griffiths, who is Assembly Member for Wrexham, was warned by demonstrators she could face electoral problems is she fails to take notice of their case.
The controversial plans by the Betsi Cadwaladr University Health Board include the axing of Llangollen Cottage Hospital.


Campaign groups across north Wales have been opposing various aspects of the proposals and around 60 of them gathered outside the constituency office of Health Minister Lesley Griffiths in Wrexham on Friday afternoon.
Among them were members of Keep Llangollen Health Services (KLHS) who are incensed that measures to wind down the town’s community hospital have already been unexpectedly put in place – before patients watchdog the Community Health Council is due to finish its examination of the shake-up package on March 1.
Maria Haines of KLHS said of the demo: “Basically I summarised the current situation regarding the proposals in general and Llangollen Hospital in particular, including the fact that I have heard that just this week a Llangollen resident needing the type of care provided by community hospitals has been admitted to Mold Community Hospital instead of Llangollen because it has been decreed that Llangollen is not receiving any new admissions.

“I then read an open message to Lesley Griffiths, which was vociferously endorsed by the assembled throng.”
This is the message she read out:  "Lesley Griffiths, at the last election, the people of Wrexham entrusted you with representing their interests, and the interests of the people of Wales in general, in the Welsh Government. And sufficient people throughout Wales voted Labour for your party to be able to form the Welsh Government, and to appoint you to oversee and safeguard the health of the people of Wales – ALL the people of Wales.
“That includes all the people who live a long way from any of the main hospitals, and all the people for whom forming a bond with a sick baby on the Wirral, or supporting that baby's already-traumatised mother, would involve an impossible journey.


“Please, Lesley Griffiths, fulfil the responsibility you have taken on as Health Minister, by:


·         compelling the Health Board to maintain and improve existing services, bearing in mind the real needs of ALL the people who need to use them, rather than withdrawing services now on the vague less-than-promise than we might get something else in the future.


“We are placing our trust in you – but if you betray that trust, we will not go away. And we will not forget, when the next election comes around.


“Sixty-five years ago, Aneurin Bevan said that: ‘The NHS will last as long as there are folk left with the faith to fight for it’.


“Let us assure you, Lesley Griffiths, that there are plenty of people ready to fight for a decent, fit-for-purpose NHS in North Wales – and we are watching very carefully to see whether you are one of us!" 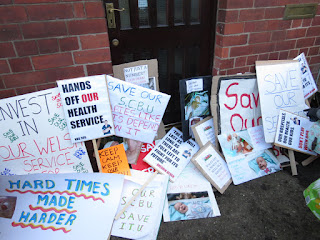 * Placards laid outside Lesley Griffiths'
constituency office.
Posted by llanblogger at 10:02 AM