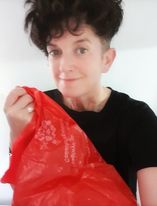 The conscientious Facebook user who called for something to be done about the “huge” amount of litter in Llangollen had her first successful outing yesterday afternoon.

llanblogger revealed how Dwysan had asked earlier in the day if anyone was interested in doing something constructive about the litter explaining: “Tourism is really important to Llangollen and I don't want to bring negative attention to it. However, there is a huge litter problem here and in all other tourist spots.”

The post then went on to suggest people should write to the county council asking them to provide more litter bins for the town, particularly by the riverside and put some signage up asking people to use the bins and/or take their rubbish home.

Dwysan also suggested people could go to the river area yesterday afternoon armed with waste bags to collect litter from tourists after handing out notes asking for co-operation.

“I am looking to do this in a gentle and proactive way - simply handing out bin bags with a smile - no blaming, no arguing just asking,” Dwysan said.

Later yesterday Dwysan told llanblogger: “I've been out. I was donated some bags from Keep Wales Tidy. A volunteer up the road dropped them off. I was very polite.

“Most said they had their own bags but the ones that took them said they were really grateful and what a good idea it is.

“I was by the river opposite the park - the rocks. It was mostly families and they seemed a bit more set up. Also lots were swimming so it was hard to talk to them. Maybe it's best to go later on in the day. I will have to think of some initiatives.

“Someone has commented that paddlers clean the river twice a week so there's a few things going on. Just need to add to it.”