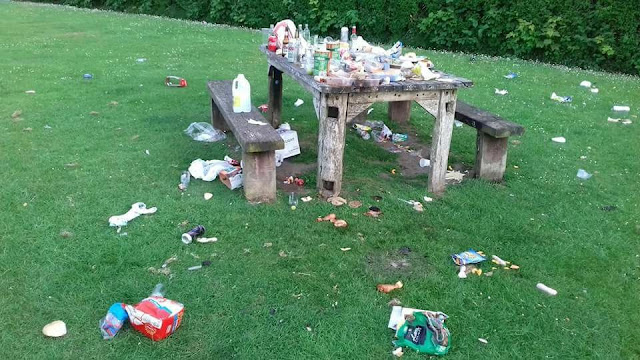 * A typical scene, taken a few years ago, of litter left behind in Riverside Park.

A conscientious Facebook user is calling for something to be done about the “huge” amount of litter in Llangollen.

In a post this morning which is picking up support from other social media users, Dwysan says: “I wondered if anyone is interested in doing something constructive about all the litter.

“Tourism is really important to Llangollen and I don't want to bring negative attention to it. However, there is a huge litter problem here (and in all other tourist spots).

“Yesterday I met a woman who was picking it up herself, all the bins were full and this morning I met Jim who was kindly picking up litter in his own time.

“I really value people spending their free time picking up litter but personally I'm already working 40 hours a week in very busy NHS practice and I feel it's more important that we need to help people take responsibility for themselves.”

Dwysan goes on to suggest: “There's a couple of things we could do. Firstly, can you write to Denbighshire County Council, their email is customerservices@denbighshire.gov.uk

“Please can you ask them to provide Llangollen with more bins (particularly by the riverside) and put some signage up asking people to use the bins and/or take their rubbish home.

“Secondly, I wondered if anyone would volunteer to go to the river (starting point we could perhaps go to other areas depending on volunteers) at midday (ish) and take some bin bags with a note and hand them out.

“I'm going to write some notes that say, ‘Thank you for visiting Llangollen, we like to see our town busy and that everyone has such a lovely time here. Please could we ask you to use this bin bag and put any rubbish in it before you leave. You can take the bin bag home or you can leave the bin bag next to the bins in the park. We really appreciate you helping to keep our beautiful town of Llangollen tidy! Thank you/Diolch.’

“We'd only need, initially, two volunteers daily to go down for twenty minutes or so about midday at the busiest time.

“I am looking to do this in a gentle and proactive way - simply handing out bin bags with a smile - no blaming, no arguing just asking!

In the Facebook post, Dwysan says the campaign would be hopefully be starting this Saturday but told llanblogger later: “I'm not arranging litter picking, I'm simply going to hand out some bin bags but thinking about it I'm not sure it'll be sunny on Saturday so might go down there this afternoon at 1pm outside Home Bargains. Strike while the iron is hot!

“I'm trying to create something that will generate some positive action rather than bashing people or name calling. It feels like something simple that we could try that doesn't cost too much and shouldn't cause offence to anyone.”