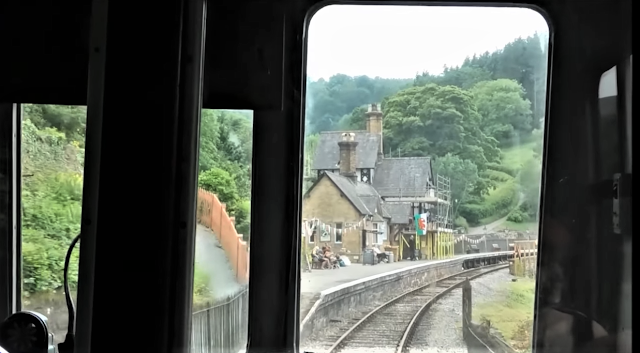 * Scene from the film Back in Business shows the train pulling into Berwyn station.

Llangollen Railway has been awarded a grant of £143,290 from the Wales Cultural Recovery Fund Phase 2.

And its finance chief says the cash windfall will ensure the heritage line's future into next year.

The purpose of the funding is to assist with salary and overhead costs both ahead of and during the initial weeks of reopening.

"We are delighted to have been given this grant," Phil Freeth, the Trust's finance director, said.

"It enables us to be confident of being able to employ staff for certain essential positions, which we hope will include at least some staff previously employed by the PLC if they haven't already got positions elsewhere.

"Crucially, the award secures the railway's immediate future in uncertain times, certainly into 2022, and beyond if visitor numbers hold up."

The news follows a successful re-opening last weekend with the diesel railcar operating to Berwyn station.

After part of the business running the railway went into administration earlier this year, it ran its first train again last Friday.

Now operated by the Llangollen Railway Trust, and after a lot of hard work, the first train, DMU Class 108, ran from Llangollen to Berwyn.

* A short video, entitled Back in Business, and taken from the cab of the DMU is now viewable on Youtube by following the link: https://youtu.be/JuqiW6n9lQQ