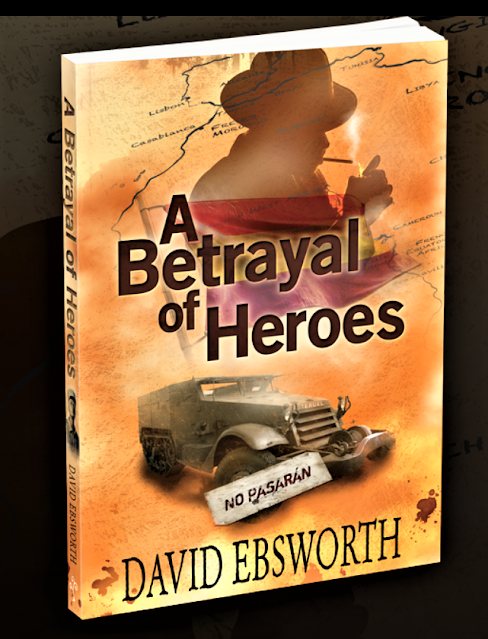 British journalist Jack Telford was involved in the Spanish Civil War right up to his neck.

But even greater adventures awaited him when he went on to immerse himself in World War Two.

His support for the losing Republican side made him a marked man when the sad Spanish conflict ended and it was only by the skin of his teeth that he managed to escape the turmoil which followed Franco’s victory.

Telford’s fictional odyssey through a battle-scarred Africa and Europe are told by Wrexham author David Ebsworth in his epic new novel, A Betrayal of Heroes.

We first meet Telford in Ebsworth’s opening novel featuring him, Until the Curtain Falls, which is set in a Spain torn apart by civil conflict in the late 1930s – a subject which the author has taken to his heart and become an acknowledged authority on.

In this new offering, the third in the series which runs to a mammoth 750 pages, we catch up with Telford as he becomes caught up with Nazi spies in Casablanca and then fights alongside former Spanish Republicans recruited into the army of Free France all the way from the Libyan desert to the liberation of Paris.

His credentials as a correspondent for the old Reynolds News - which actually existed - give Telford access to some of the Second World War’s hottest spots and a cavalcade of real famous people whose stories Ebsworth skilfully weaves into the narrative.

In his spying guise, for instance, he links up with the film star Leslie Howard, whose death in plane crash en route from Spain to the UK in 1943 remains a tantalising mystery to this day and, as a war reporter, he crosses paths with the likes of Charles De Gaulle, US general George Patton and even Ernest Hemingway.

Apart from its fast-paced action and absorbing plot, what impresses most about this book is Ebsworth’s minute attention to detail.

If he writes about a character lighting up a cigar, he has to describe in detail its brand and the colour of the tin it came from. And if someone boards a plane it must be identified right down to the type and the sound its engines make as they get ready for take-off.

Telford’s incredible wartime journey affords him a number of near-death experiences but will our hero survive to find himself at the centre of some fresh adventure? We shall have to see.

A Betrayal of Heroes is available on Amazon at: https://www.amazon.com/David-Ebsworth/e/B007C7I0XS