2020 plan is recommended for approval - with amendments 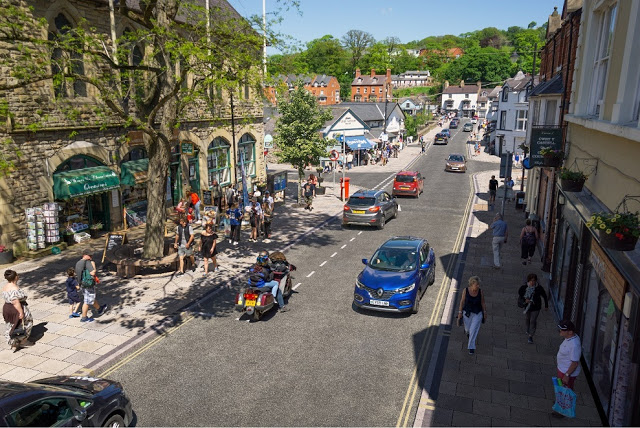 * An artist's impression of the finished 2020 scheme.

The 2020 scheme is due to be considered by the cabinet next Tuesday and agenda papers for the meeting show that officers have recommended it goes ahead with some amendments to the original proposals.

The scheme is intended to improve the public realm along Castle Street by replacing the existing kerbs and footway paving with high-quality materials.

Also proposed was the removal of on-street parking from Castle Street and from the Abbey Road/Castle Street junction to enable the adjacent pavements to be widened and reduce parking-related congestion on Castle Street.

Other proposals included introducing a number of pedestrian dropped kerbs along Castle Street and to reduce traffic speeds by raising the road surface at some side road junctions as well as providing two loading bays for businesses on Castle Street, together with two disabled parking spaces near to Castle Street.

The Castle Street improvement is part of a phased-approach to improve parking and to improve walking and cycling routes in the town.

In his report to next week's cabinet Councillor Brian Jones, Lead Member for Waste, Transport and the Environment, recommends members approve 2020, including a list of amendments which result from the recent three-week public consultation exercise.

The report reveals that a total of 507 questionnaire responses were received in response to the recent engagement.

Of the 507 responses, 95 were from business owners, 358 were from residents, 32 from visitors, and 16 from people who work in the town but live elsewhere.

The questionnaire asked respondents whether they agreed or disagreed with the main proposals contained within the project.

Of the responses received, the number of people who agreed with the various proposals generally ranged from between 60% and 68%, except for 48% of respondents who agreed that the project would make them more likely to walk or cycle.

The number of people who disagreed with the various proposals generally varied from between 25% and 36%, except for the 22% of respondents who disagreed that the 20 mph speed limit and speed reduction features would make Castle Street safer.

A total of 64% respondents said the project is generally a good idea, with some of those saying the project could be improved further.

A total of 36% of respondents said that the project isn’t generally a good idea.

It goes on: "The public engagement feedback has been carefully considered and discussed with the Lead Member and local elected members. This has led to some design changes proposed for the project."

The report details the proposed amendments, followed by the council's comments on each one. They are:

1. Change the two proposed loading bays for Castle Street to general loading bays. This is proposed in response to concerns raised by business owners about them not being able to use their own vehicles to unload goods.

The council says: "It will also allow customers to move heavier items. Main negative impact of this is that the loading bays will be occupied more frequently which will reduce their availability and result in more interruptions to the flow of traffic. Will also increase need for regular enforcement."

The council says: "This would make the bay an unrestricted length of road outside of these hours. This would allow anyone to park prior to 0930 in the morning subject to the availability of a space.

"Negative is that bays could be taken up by overnight resident parking i.e no guarantee that they’d be available."

The council says: "This is proposed in response to concerns raised by business owners about them not being able to use their own vehicles to unload goods. It will also allow customers to move heavier items. Main negative impact of this is that the loading bay will be occupied more frequently which will reduce its availability. Will also increase need for regular enforcement."

4. Inset proposed Castle Street loading bays (This means that the existing pavements won’t be widened where they are adjacent to the proposed loading bays).

The council says: "This will mean that the loading bays won’t extend out as far into the road as would have been the case. Only negative impact of this is that the pavements won’t be widened where adjacent to the loading bays."

The council says: "Reconsider options for Short Street as part of Phase 2 including potential for one-way with left turn only restriction In light of opposition to closure of Short Street it is recommended that it is reopened and a traffic camera survey is undertaken to monitor the use of Short Street and any road safety or congestion-related issues."

6. Consider amendments to East Street/Parade Street 90 degree bend Consider scope to improve the existing “pinch-point” issues that have been reported.

The council says: "This needs to be checked to ensure it won’t interfere with the swept-path of large vehicles turning into Market Street off Castle Street."

8. Undertake traffic assessment and consider options for re-routing of HGV through traffic

The council says: "Evaluate and quantify HGV through traffic, is it same local hauliers using the route for example."

The cabinet reports can be viewed at: https://moderngov.denbighshire.gov.uk/ieListDocuments.aspx?CId=281&MId=6272&LLL=0

Next Tuesdays' meeting, to be held online, can be viewed on the same web link.

Posted by llanblogger at 1:29 PM