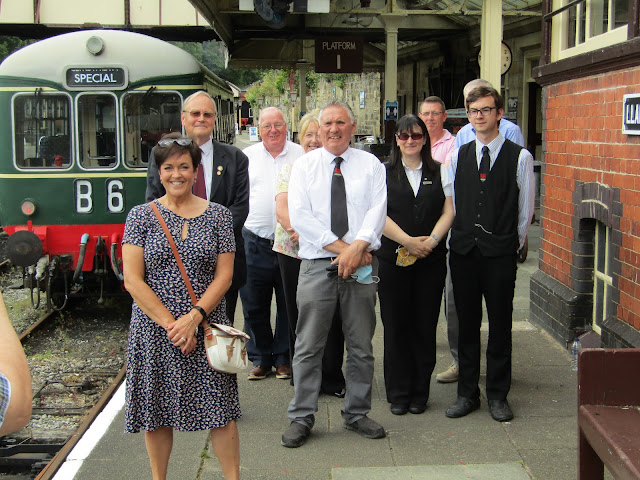 * The Deputy Minister with railway board members and volunteers at Llangollen station. 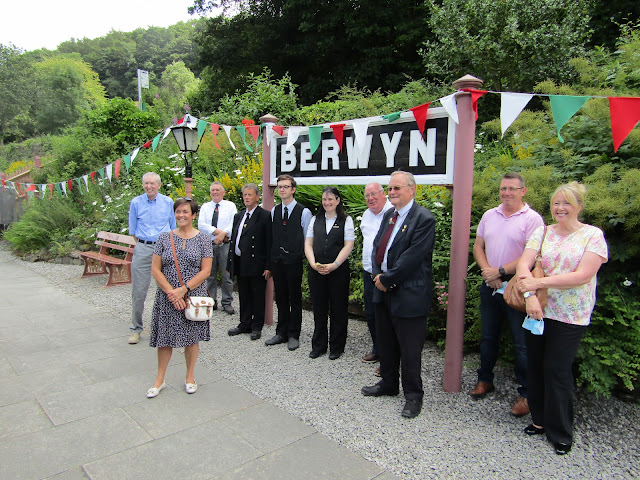 * Board members and volunteers with the Deputy Minister on Berwyn station. 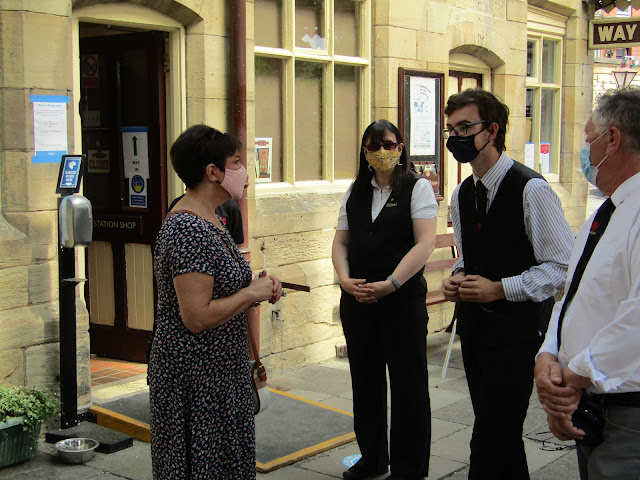 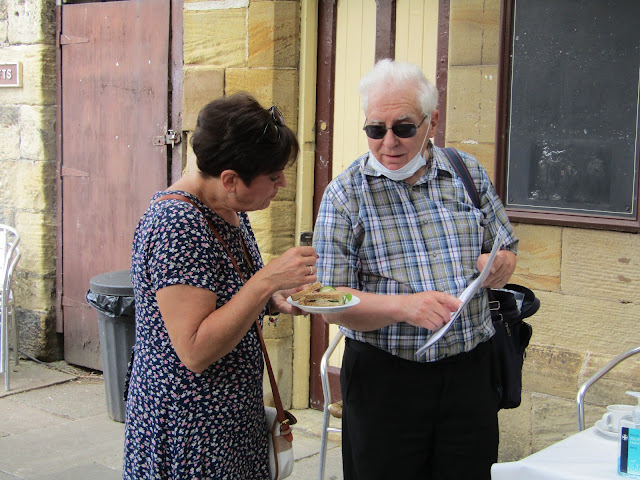 * The Deputy Minister is shown pictures of recent developments on the line by railway publicity officer George Jones.

The country cannot afford to lose heritage attractions such as Llangollen Railway, which is an organisation the Welsh Government wants to support, maintain and to see thrive.

That was the message from Deputy Minister for Arts and Sport, Dawn Bowden MS, when she paid a whistle-stop visit to the line this afternoon (Tuesday).

Earlier this month the railway was awarded a grant of £143,290 from the Wales Cultural Recovery Fund, which is controlled by the Welsh Government, to aid its recovery from recent financial problems brought on first by closure due to the pandemic and then when the company which ran it plunged into receivership with debts of £350,000.

But thanks to massive efforts by the separate and solvent Llangollen Railway Trust the railway is now back up and running.

As the first stage of its salvage operation it is currently running a diesel train between Llangollen and the next station along the line at Berwyn but has firm plans to bring back highly popular steam-hauled services early next month.

During her visit today the Deputy Minister was invited to take a trip aboard the Class 108 heritage diesel railcar and see for herself the progress that has been made since the railway's re-opening on July 9.

She was given a full update by members of the trust board and volunteers along the way.

The Deputy Minister said: "One of our commitments as the Welsh Government is to make sure that our tourism industry is in a position to be able to thrive after the pandemic.

"We want to support our tourist organisations. We have supported them in Llangollen because we recognise the importance that tourism has to this part of north Wales.

"Without the Llangollen Railway we'd be losing a huge asset, to the economy, to tourism and to jobs.

"So the importance of it is literally buying into our strategy for tourism in north Wales."

Asked if it was likely the railway would be getting any further Welsh Government support, the Deputy Minister said: "Where there is a need and where we believe that there is value for money we will continue to support organisations like this.

"We cannot afford to lose this kind of heritage scheme. Llangollen Railway says so much about the area, our railway heritage and it's absolutely something we want to support and maintain and to see thrive.

"That's what our contribution has been, It's been about making sure that the railway can survive and hopefully be a thriving, going concern for the future of the tourism industry and for Llangollen."

Ms Bowden said she had been "very impressed" by what she had been shown, adding: "It wasn't that long ago that the organisation went into administration and the trust has had to turn it around and build a business case.

"They've also had to get a business plan together and they've had to make all this work. It's to their true credit that they've been able to do all that.

"We've been able to help with this but it's these people on the ground that have turned it around."

One of those who greeted the Deputy Minister was trust vice-chairman Phil Coles.

He said: "It was a very successful visit. She was impressed by what she saw and heard and my parting comment to her was, 'don't be surprised if we come back and ask for more support in future,' and she said, 'by all means'.

"She said she was really impressed by what we have been doing but we've still got a long way to go.

"We've got to get the engineering going to get the trains further along the line and the icing on the cake will obviously be next March when we open all the way to Corwen.

"We've also got steam coming in early August, we hope."

Posted by llanblogger at 2:46 PM