Comedy series starring Llan actor is up for honours 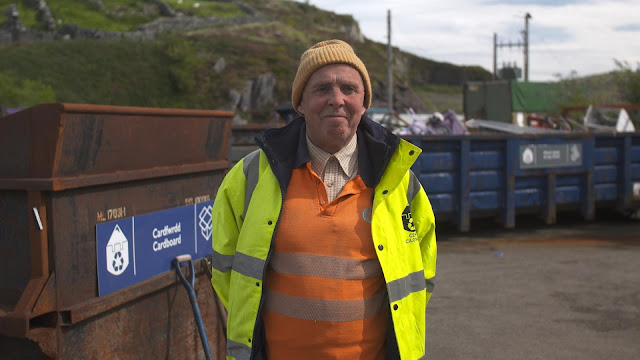 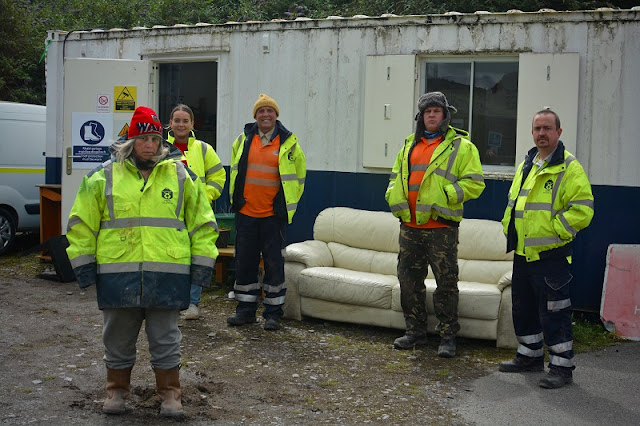 A comedy series starring an actor from Llangollen has helped put a TV company taken over by the staff in the running for a record haul of prestigious awards.

Cwmni Da has been shortlisted for an “incredible” total of seven awards at the Celtic Film and Television Festival – more than any other television company in the history of the event founded more than 40 years ago.

It’s also half the number of nominations for all the other television production companies who make programmes for S4C.

The winners will be announced in September.

Dyfed Thomas, a native of Rhos who now lives just outside Llangollen, and the rest of the cast of Rybish (Rubbish) completed filming the  comedy drama series during the Covid-19 lockdown – by creating a bubble for the cast and crew.

Production of the sitcom,  set in a recycling centre, was brought to a halt in March last year by the coronavirus crisis but undeterred Cwmni Da came up with a plan to carrying on filming.

Members of the crew self-isolated for a fortnight before resuming and they were tested regularly throughout the shoot.

When they were not working, the team were holed up in an empty pub, The Beuno, in Clynnog Fawr on the north coast of the Llŷn Peninsula.

The company built their own recycling centre on an old landfill site at Carmel, near Caernarfon.

They used fixed cameras which were remotely controlled to film the remaining episodes in the six-part series.

A delighted Dyfed said: “Being on set by day and living in the Beuno at night was certainly a very exciting, constructive and creative experience.

“There were six to eight of us together all the time. Instead of going home, we would carry on discussing and pay attention to the job full time.

"That just doesn't happen usually, and there certainly isn’t an opportunity to get so close to the author and producers.”

It’s believed Cwmni Da was the first broadcast company in the UK to become an Employee-Owned Trust just over two years ago.

The move saw former managing director Dylan Huws, who remains on the board, sell his shares to the trust.

The company employs 53 staff and a host of freelancers and is based at a state-of-the-art production centre in the Goleuad building on Victoria Dock.

Their output includes some of S4C’s biggest hits like Fferm Ffactor, Noson Lawen, Deian a Loli, and Ffit Cymru, as well as award-winning international co-productions like Llanw (Tide).

But the news about being shortlisted for seven awards heralds a new high water mark for the respected company that turns over around £5 million a year, making a significant contribution to the local economy.

A documentary series, 47 Copa (47 Summits), that’s been selected in the sports category, features the successful attempt by endurance athlete Huw Jack Brassington, who hails from Caernarfon and now lives in Cockermouth, Cumbria, to conquer one of the world’s toughest mountain challenges.

Camera crews followed the former GB triathlete in treacherous conditions as he completed the gruelling Paddy Buckley Round, which sees runners covering a distance of some 100km and climbing 8,000 metres which it the equivalent of scaling Everest, taking in no fewer than 47 summits – all in 24 hours.

At the other end of the spectrum is the hit comedy series, Rybish (Rubbish), which was shot during the Covid-19 lockdown last year and set in a recycling centre.

A very different  lockdown show, Côr Digidol (Digital Choir) presented by talented tenor, Rhys Meirion, who hails from Porthmadog and now living in Pwllglas near Ruthin, is among the top tips in the entertainment category and showcases a rousing online performance of the famous Welsh hymn Calon Lȃn which went viral on social media with more than 190,000 views.

The uncertain future of a more traditional choir, Côr Meibion Trelawnyd, one of North Wales’s largest male voice choirs which has an average age of 74, provided the poignant backdrop for Y Côr (The Choir), that’s been shortlisted in the arts category.

Meanwhile, at the other end of the age range the 2020 Christmas special of the hugely popular kids’ series, Deian a Loli (Deian and Loli), is also up for a gong in the children’s category.

Having so many of the company’s programmes shortlisted for awards at the Celtic Film and Television Festival was the source of “quiet” pride for Llion Iwan, who has taken over from Dylan Huws as managing director after originally joining Cwmni Da as director of content in 2019.

Llion said: “What stands out for me is that our programmes have been shortlisted in so many diverse categories which shows how multi-talented our team is.

“As a company, Cwmni Da has always punched well above its weight and this has gone to a whole new level after the company became an Employee-Owned Trust. Everybody is even more committed than before.

“We’re very lucky in that we have a core of highly creative and experienced directors and producers as well as younger people who are being mentored.

“By re-organising our schedules and changing how we work, we have been able to continue producing programmes through the pandemic and we’ve done as much as we can to support experienced freelancers in our area who have been faithful to the company.

“We’ve also continued to contribute to the local economy and our turnover last year remained stable at around £5 million.

“I’ve been going to film festivals and similar competitions such as this one for many years and I know that they are worthwhile especially if you gain recognition in several categories.

“It’s an excellent shop window for us and it’s going to be good for business because it showcases what we can do.”