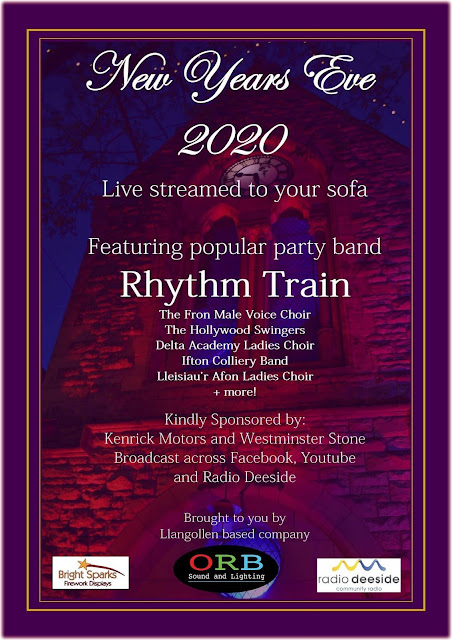 The aim is to raise the spirits of the community after a tough year by showcasing local talent.

The action-packed three and a half hour show, which runs from 9pm until 12.30am next morning, will be produced from one of the venues in Denbighshire the company usually works closely with but the exact location is being kept secret due to Covid regulations.

On the bill along with Rhythm Train will be the Fron Male Voice Choir, The Hollywood Swingers, Delta Academy Ladies' Choir, Ifton Colliery Band, Lleisiau'r Afon Ladies' Choir and more.

An ORB spokesperson said: "The stream will include three live 45-minute sets from the band, interspersed with some pre-recorded content and adverts from local sponsors and local community groups

"We will also encourage people to send in messages to friends and family using a hashtag which can be moderated and shown on the bottom of the stream.

https://www.facebook.com/ORBsoundandlighting sites as well as being broadcast on Radio Deeside.

"We aim to reach as many people as possible as we realise New Year's Eve can be a hard and lonely time for many people - this year more so than before.

"We want to bring people together virtually, lift spirits as we enter the new year, and to give back to the community."

ORB Sound and Lighting provides staging, equipment and technicians for the outside stages of the International Musical Eisteddfod and Llangollen Fringe Festival each July.

They also support Llangollen Operatic Society, Young 'Uns and the pantomime group with all their equipment alongside technicians, who installed all of the new upgraded equipment for the Ysgol Dinas Bran ‘Curtains Up’ appeal, and who most recently gave up their time and equipment weekly during lockdown to beam a ‘Thank You’ message across the town during the Clap For Carers campaign.

The spokesperson added: "We have chosen a venue which we can adhere to Covid regulations and will have a number of measures in place including strict social distancing between all persons present.

"All equipment will be thoroughly sanitised before and after use, face coverings will be worn by the production team, and sanitiser will be provided throughout.

"The building will also be locked during the entire evening to ensure we can remain safe inside, and that no members of the public can enter.

"Although the event is free we are asking for people to buy tickets for it to help us cover the costs.

"We are asking them to pay what they can and the link is on the event's Facebook page at: