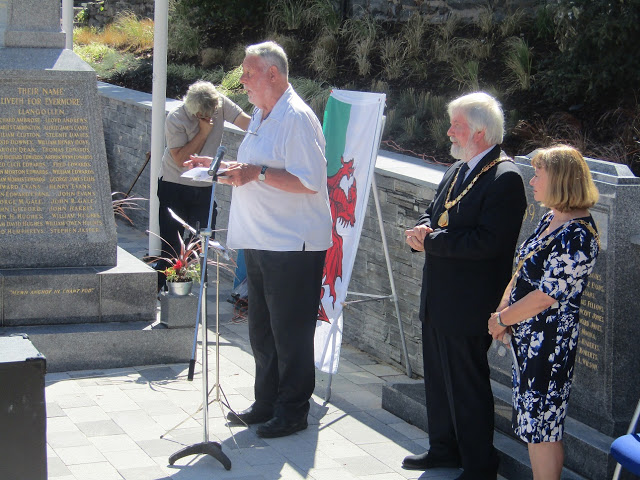 * Terry Waite at the official opening of Llangollen's Centenary Square in summer 2018. He is flanked by the then-mayor and deputy mayor Jon Haddy and Issy Richards.

The news comes in an update on the past year’s tumultuous events, which included the cancellation of this year’s festival due to the pandemic, by eisteddfod chairman Dr Rhys Davies.

The famous human rights campaigner, who was held hostage in the Lebanon from 1987-91, became the festival’s popular ceremonial head a number of years ago.

Dr Davies says in his message to the network of eisteddfod volunteers: “Terry Waite has stood down as our President after many years of support.

“Terry had originally indicated he would be retiring in 2020 and unfortunately events over the summer deprived us of an opportunity to share a final eisteddfod with him.

“We will be inviting him back to a future eisteddfod when we can thank him publicly and possibly hold a concert in his honour.

“His commitment to the Eisteddfod has been exemplary forever promoting our festival and extending the hand of friendship.”

Elsewhere in the update Dr Davies talks of plans for the next eisteddfod.

He says: “When the Board of Trustees made the difficult decision to postpone Llangollen 2020 little did we know then about the impact that Covid-19 would have on our communities – locally, nationally and internationally.

“Months later and we are now fortunately able to start looking to the future, whilst considering carefully how the public health situation may unfold.

“It is currently uncertain whether mass events will be able to be held in Wales by the summer 2021 and the Board is working on flexible scenarios that will ensure that the Eisteddfod has a presence next year that is fitting for the profile and ethos of the event that we all know and love.”

Dr Davies goes on refer to the financial help the eisteddfod has received during the year.

He explains: “Having received vital financial support from Welsh Government in the immediate aftermath of the postponement decision, I am pleased to advise that we have also been successful in our application to the Cultural Recovery Fund.

“These funds will help to sustain the organisation over the next three months as we plan for 2021.

“We have also secured funding for a new community engagement programme from the Arts Council of Wales, under their Connect and Flourish funding strand.”

Referring to the running of the eisteddfod, Dr Davies details changes in the board and says that Betsan Moses has joined as interim CEO “providing valuable management assistance as we navigate this challenging time”.

The chairman has a special word of thanks for the volunteers, adding: “Throughout this period volunteers have shown their commitment and enthusiasm for our event, and a determination that we will continue and return from this even bigger and better.”

Terry Waite, who is known and revered by many people around Llangollen, has been awarded the MBE and CBE for his humanitarian work.

He was serving as special international peace envoy to the Archbishop of Canterbury when in 1987 he journeyed to Lebanon – then one of the world’s most dangerous place – in a bid to secure the release of four hostages, including the journalist John McCarthy, being held by an Islamic jihad organisation.

During the tense negotiations he was himself taken hostage on January 20, which was the start of his journey into the hell of four years of captivity in a Beirut dungeon.

For most of the time Terry was kept in solitary confinement in a room without any natural light, chained to the wall and forced to sleep on the floor. He was beaten and subjected to mock executions.

He recalls of how every day he did his best to hold himself together spiritually, mentally and physically.

In the final stage of his captivity, his robust health began to deteriorate when he contracted a severe lung infection.

His torment eventually ended in November 1991 after 1,763 days as a hostage.