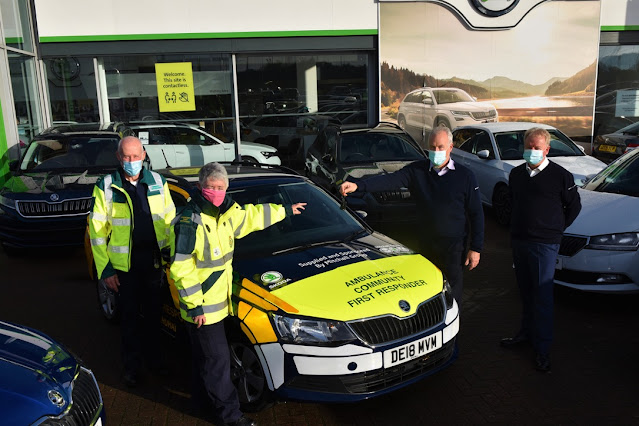 * The new car is handed over by staff at Mitchells Skoda to
First Responders Effie Cadwallader and Adam Salomonson.

A new rapid response vehicle is being deployed to deal with life-threatening medical emergencies along the Wrexham-Shropshire border in an area including Llangollen.

The car has been bought with a £10,000 grant from the Wales Lottery and sponsorship from the Cheshire-based Mitchells Skoda dealership group.

It follows an online crowd-funding appeal by volunteer Effie Cadwallader on behalf of the Wrexham Rural Community First Responders group, which raised more than £2,000.

The keys to the vehicle were handed over at a socially-distanced ceremony at Mitchell’s Cheshire Oaks headquarters.

Effie, a long-serving Community First Responder from St Martins, near Oswestry, raised more than £2,000 with a crowd funding appeal which attracted more than 100 donations. The appeal has paid for car’s instantly-recognisable bright livery, plus necessary accessories and running costs.

Wrexham Rural Community First Responders will use the car solely for attending 999 emergencies assigned by the Welsh Ambulance Service NHS Trust around the border area communities of Chirk, the Ceiriog Valley, Llangollen, Acrefair, Ruabon, Overton, Penley, Bettisfield and the outskirts of Ellesmere.

When it is ‘off duty’ the car will be used by volunteers for visiting groups and community centres to undertake basic life support and public access defibrillator awareness courses.

“ We are hoping to gain the support of our local communities when the car is seen out and about performing its dedicated role.”

* More information about the work of Wrexham Rural Community First Responders, and how to support the group, can be found at www.wrexhamruralcfr.co.uk