Llangollen Railway says Corwen station will open next May 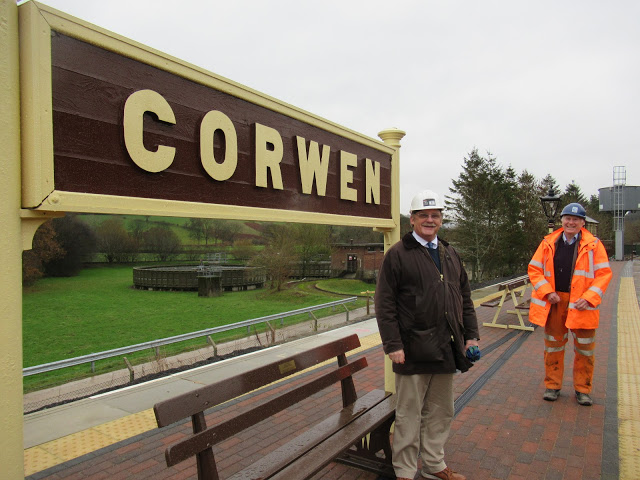 on a recent visit to Corwen station.

Despite the major financial setbacks of 2020 Llangollen Railway still aims to have trains running regularly to Corwen by May of next year.

Currently closed for the third lockdown this year, the heritage railway has lost out on hundreds of thousands of pounds of fares from major crowd-pullers such as the annual Santa specials.

But in his annual festive message its press officer George Jones says: “As we end this most peculiar year, I send greetings to all my contacts in the press and media with thanks for your support in reporting progress with the Corwen Project and other events at Llangollen Railway during these challenging times.

“Whilst there is now a further unfortunate turn of circumstances as we end 2020, the hope is things will improve next year and we will see the new station at Corwen open on a target date of 28 May.

“The support obtained from donations to allow the renewal of timbers for Dee Bridge has come from near and far thanks to the publicity given to the appeal and the response to it.

“The success of the fundraising also allows for the renewal of sleepers in Berwyn tunnel.

“If CV19 restrictions permit, this engineering work will allow the passage of ballast trains to Corwen and the tamping of the station loop in time for an official inspection of the new station prior to opening, all of which will provide further exciting news reporting to conclude the challenge of the past ten years to extend the railway westwards from Carrog."

As llanblogger revealed in October, the railway put out an urgent call to its supporters for £15,000 to revive Dee Bridge, built in 1865 and now in desperate need of new timbers if it is to continue to carry services over it next year.

Posted by llanblogger at 6:57 AM