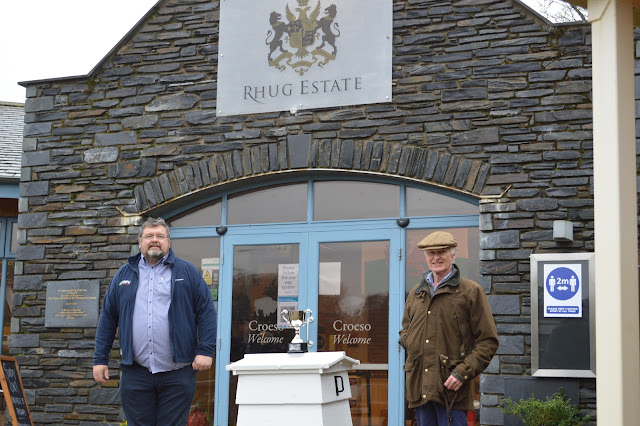 Lord Newborough, owner of Rhug Estate near Corwen, has been announced as the winner of NFU Cymru Clwyd Branch’s Dafydd Jones Memorial Award.

The award winner was announced last night at the NFU Cymru Clwyd County Conference which was held virtually.

The Award Cup is presented annually to the NFU Cymru Clwyd member who has made a great contribution and a lasting, positive impact on agriculture in the county.

Dewi Jones, NFU Cymru Clwyd County Chairman, said: “Congratulations to Lord Newborough on winning this year’s award. He has made an enormous contribution to the local economy and the organic farming industry over many years.

"His endeavour and dedication to his work sees him frequently travelling between Corwen, London, the middle and far east to meet customers face to face to explain the virtues of buying their meat from Wales.”

The Dafydd Jones Memorial Award was created in 2019 in memory of Dafydd Jones, from Pencoed Ucha, Pwllglas, who was the Clwyd County Chairman in 2019 but suddenly passed away after he courageously battled with Myeloma throughout the previous 18 months. Dafydd had represented his county on NFU Cymru’s Rural Affairs Board for eight years.

Lord Newborough said: “I am truly honoured to have been chosen for this award by my fellow local NFU Cymru members. It is particularly special this year as we have just celebrated our 20th anniversary of the farm being certified organic. This has been a tough year for the business but work on the farm has continued regardless of the pandemic as we, like all farmers, have continued to produce food for the nation.”

At the heart of Rhug is Lord Newborough’s commitment to an organic lifestyle. Rhug Farm is self-contained and a true ‘field to plate’ operation applying the highest standard of sustainability. Using the most sustainable farming practices Rhug prides itself on superior tasting meat products.

The organic farming enterprise extends to two farms and has grown over the past 20 years to nearly 8,000 acres. Organic beef, lamb, chicken, deer, bison, turkey, goose, and game when in season, are reared on the farms. Rhug Farm Shop stocks almost 3,000 products from local suppliers and small businesses.

Café Rhug is located just next to the farm shop and creates dishes that are made with seasonal produce using Rhug’s own products where possible. For those who are on a much needed pit-stop, Rhug has the On The Hoof takeaway service.

This takeaway isn't your average roadside burger van, it uses organic meat from the farm to create an unforgettable experience on-the-go. There is also the Drive Thru, which opened in 2018, the first opened on a farm in the UK for those that don’t have time to stop there is a wide selection of meals on the go.

Lord Newborough is adding value wherever he can, by utilising natural ingredients and wild forage off the Estate he has recently created a luxury, organic and sustainable skin care range to sell into the global market further putting north Wales on the world map as well as creating valuable employment into this rural part of the country where employment is hard to come by.

Posted by llanblogger at 9:09 AM