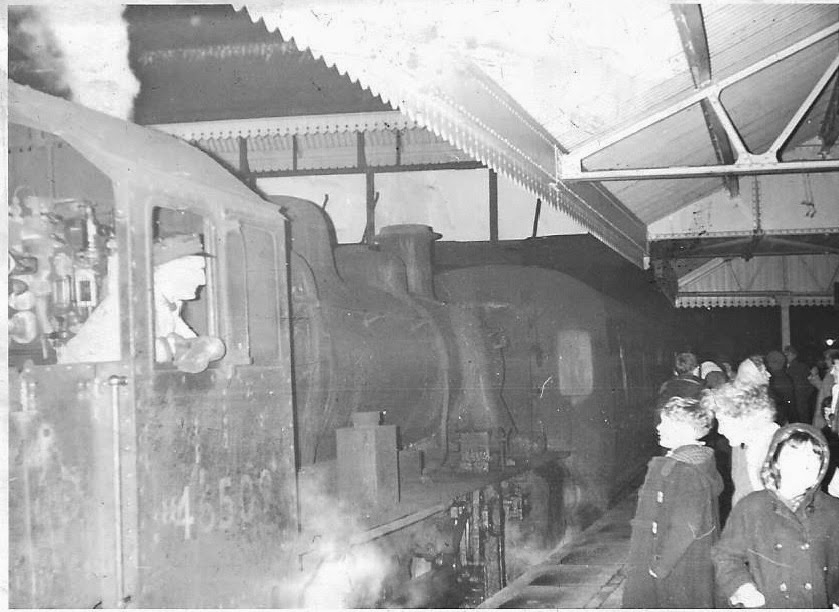 * Llangollen GP Dr Rhys Davies, as a young boy, waits to board the final passenger train to run through Llangollen 50 years ago. 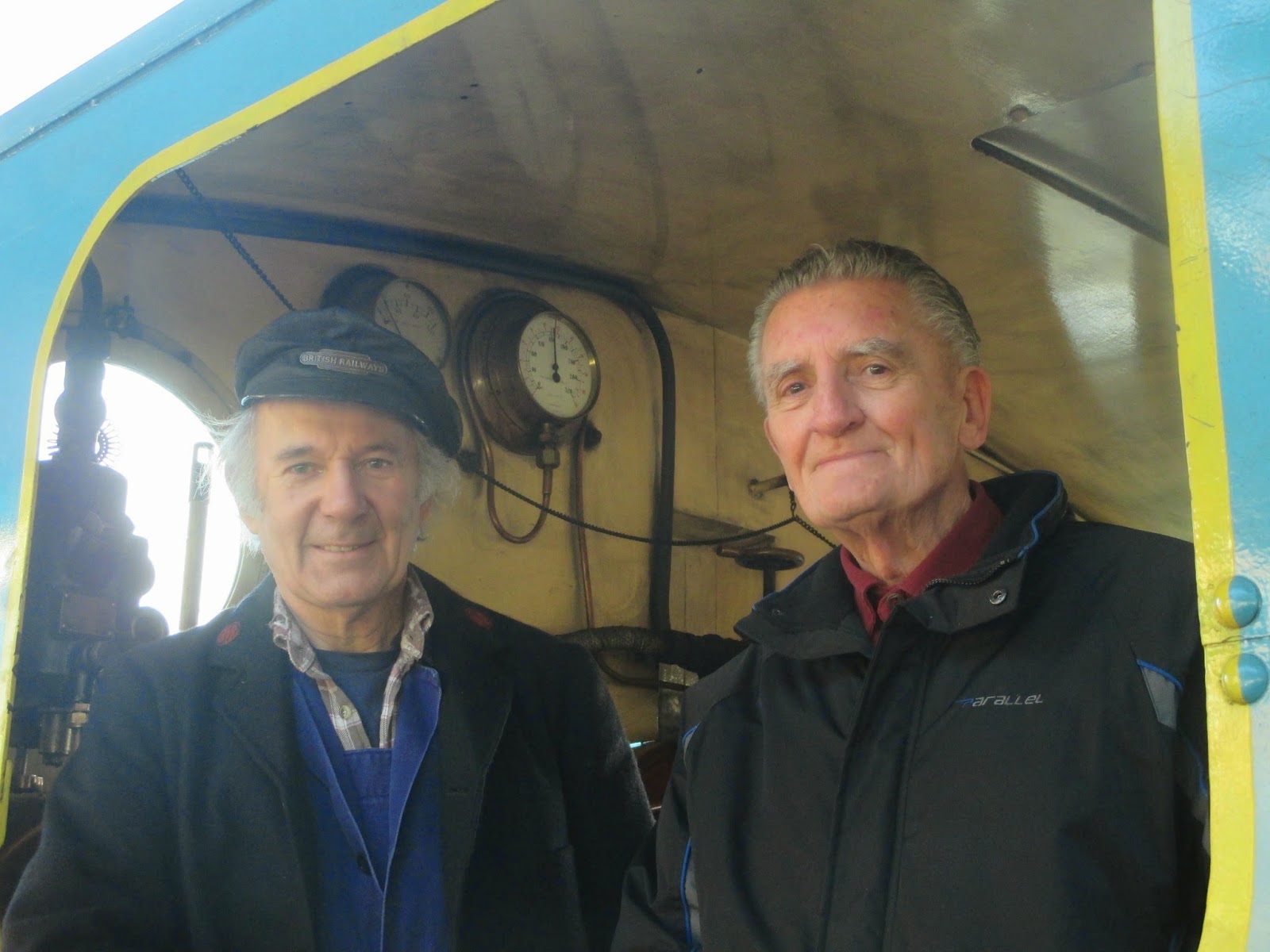 * Elwyn Jones, from New Broughton, the fireman on the last
train through Llangollen, returned the station to meet the crew
of the heritage steam engine 'Jessie' including driver Mike Pearce, left.
To mark the 50th anniversary today (Friday) of the day the last passenger train ran through Llangollen before the service fell victim to Dr Beeching's axe, llanblogger brings you this special feature prepared with the help of Llangollen Railway's George Jones ...
THE last train through Llangollen on the Ruabon to Barmouth line ran on January 16, 1965.
And to mark the 50th anniversary of the momentous event George Jones of Llangollen Railway, who remembers it very well, has been looking back to when Dr Beeching’s infamous axe fell on the passenger service.


He recalled: “The Ruabon to Morfa Mawddach/Barmouth line was listed for closure in a report published by the British Railways Board (BRB) in 1963, entitled The Reshaping of British Railways.
“This was at a time when Dr Richard Beeching was chairman of the BRB having been brought in from by the Minister for Transport, Ernest Marples.


“The decision to appoint him followed a statement by Harold McMillan, the then Prime Minister, in March 1960 to the House of Commons, when he said: `First the industry (i.e. railways) must be of a size and pattern suited to modern conditions and prospects. In particular, the railway system must be remodelled to meet current needs, and the modernisation plan must be adapted to this new shape.’
“This was at a time when the British Railways operating deficit had reached £86.9m rising to £135.9m when interest and other charges were added and was causing popular national concern.


“The report and its conclusions were handwritten by Dr Beeching, with financial information added, but nowhere does his name appear in the document. Despite this it is popularly known as The Beeching Report.
“Whilst Dr Beeching might be seen as the ‘axeman’ in the eyes of the public and the popular press, it is generally accepted now that the ideas set out in the report to reshape British Railways were sound, even if some of the individual line closures were questionable on the basis of the limited information available on which to make the decisions.


“A continuing criticism of the report is that it gave no consideration to future population growth and economic expansion of certain areas.
“The estimated annual loss for keeping the line open, as quoted at the TUCC Objectors meeting, was - operating cost £152k less revenue £47k - £105k a year plus £93k for track renewals in future years.


“The original date for closure was set as November 23, 1964 but delayed due to the need for Crosville to arrange the bus service.”


George added: “Objections to line closures were to be made to the Transport Users Consultative Committees and would only be accepted for cases of hardship resulting from the closure.
“Due to the absence of other public transport along the length of the line west of Llangollen, the objections of hardship were accepted and recommended to the Minister.


“However, the result was to arrange for the Crosville bus company to provide a rail replacement bus service along the line of route to allow for its closure. This was delayed until such time as Crosville could acquire the additional vehicles to operate the new route as the X94 from Wrexham through to Barmouth.
“When the vehicles were available the line’s closure was set for January 18, 1965, effective from Saturday, January 16, the last day of trains to Llangollen and Barmouth to Bala – the service between had been suspended due to flooding in December 1964.


“It was soon recorded that the X94 route was the biggest loss making bus route in Wales.
“Whilst the passenger service was withdrawn in January 1965, the line to Llangollen remained open but only for goods traffic to the yard west of the station until final closure in April 1968.


“This situation was maintained despite the town pleading for excursions to be operated to the station during Eisteddfod week.
“The railway was then dismantled in its entirety and Llangollen station became derelict for the want of agreement for it to be redeveloped.


“It was only after 10 years disuse that the preservation scheme took hold and returned it to use from 1975. Without the railway venture taking off the site would likely have been cleared and a notable feature of the Llangollen scenery would have disappeared.
“Many people who come to the heritage railway today to enjoy the heritage line and lament the line’s closure say it should have been kept open.


“Had it been retained the line would have been severely rationalised and probably only the main stations – Llangollen, Corwen, Bala, Dolgelley - would remain.
“In today’s world it would be operated by Arriva Trains Wales with a minimal diesel service, not unlike that provided on the Central Wales line.


“There would be no aspects of the steam age heritage as have been recreated by the Llangollen Railway which is what a lot of people come to experience and enjoy as elements of a bygone age.
“As someone once said, Dr Beeching did us a favour in closing the line as it gave us, the volunteers, a reason for recreating it – even if it has taken 40 years to achieve the dream of rebuilding 10 miles from Llangollen to Corwen – with a bit still to do.”


Christopher Magner, a rail enthusiast who travelled from Wirral to record the final day, said: “I was very sad when I travelled on the last train  from Llangollen. It was so frustrating that all the efforts  to keep the route open had come to nothing in the face of officialdom."

How the press recorded the occasion


Under the headline “The Beeching axe fell on the Barmouth line on Saturday night,” this how the Leader of the day recorded the closure.
“Hundreds of people waited at stations to watch the last trains go by.


“Scores bought tickets for momemtos, while others made the trip.
“Yesterday, (Monday 18 Jan) the Wrexham-Barmouth bus service, replacing the train came into operation.


“The first bus left Wrexham at 7.25 was empty. The first fare was picked up at Llangollen.
“Business in the opposite direction was much better.


“The last train from Ruabon left at 5-50pm on Saturday (16 Jan). Normally, only a handful of people travel on it. On Saturday 40 passengers, some with tape-recoding equipment to catch the last hoots, whistles, etc, were aboard. Flashbulbs popped. It was more like an opening than a closure.
“Railway enthusiasts, some having travelled from the South of France, the Midlands and Merseyside had a bitter pill to swallow when the train reached Llangollen.


“Recent floods had closed the Llangollen-Bala section of the line and the rail passengers had to leave the train and travel that section by bus.
“About 100 people were on Llangollen station to see it chug in and unload. It turned round at 7-15 and went back to Ruabon.


“At Bala about 70 people were on the train for Barmouth. Once more, people crowded the station platform which was bare of lamps, seats and other fittings which had been bought mostly by the 70-odd station staff.”

llanblogger has helped the town’s heritage railway unearth a rare picture of the last British Rail train to run through the local station.


We put out the call to our readers and swiftly received a reply from well-known local GP, Dr Rhys Davies.


He sent in an atmospheric black and white picture – thought to be one of only a few in existence – showing himself as a boy along with a group of other travellers gathering by the final train into the station.


Dr Davies said: “The picture is of the last train into Llangollen in January 1965. I'd gone on it with my mother and one of my brothers.


“I am the little lad in the duffle coat looking at the engine after we'd got off. I kept the ticket, but I think it's long gone!”


“Our expert Chris Magner has studied it and says it is a notable find after all these years.
“The loco is an Ivatt 2 Class as used in the latter days of the line and known as a Mickey Mouse.


“The last train, with driver Fred Taylor and fireman Elwyn Jones, both of Croes Newydd shed, Wrexham, was an historic occasion and a bitter end to a battle to retain train services to the town.”


“As there is no train service planned in January 2015 beyond the 4th, Llangollen Railway will not recreate the event as such on the anniversary date.


“However, finding this picture is very significant as I had been unaware of any photo of the last train leaving Llangollen.”


Llanblogger editor Phil Robinson said: “I am delighted our news website has been able to help the railway in this way. My thanks to Dr Davies for getting in touch.


“The last British Rail train out of the station was a landmark occasion in the history of our town.”

The man who was the fireman on the last British rail passenger train through the station 50 years ago made a sentimental journey back to Llangollen last weekend.


Speaking about the occasion 50 years ago, he said: “My abiding memory of the occasion was thinking. `this will be the last time I do this here’, as I put the water hose into the engine's tender to top up the water level for the journey back to Ruabon.”
Posted by llanblogger at 7:07 AM