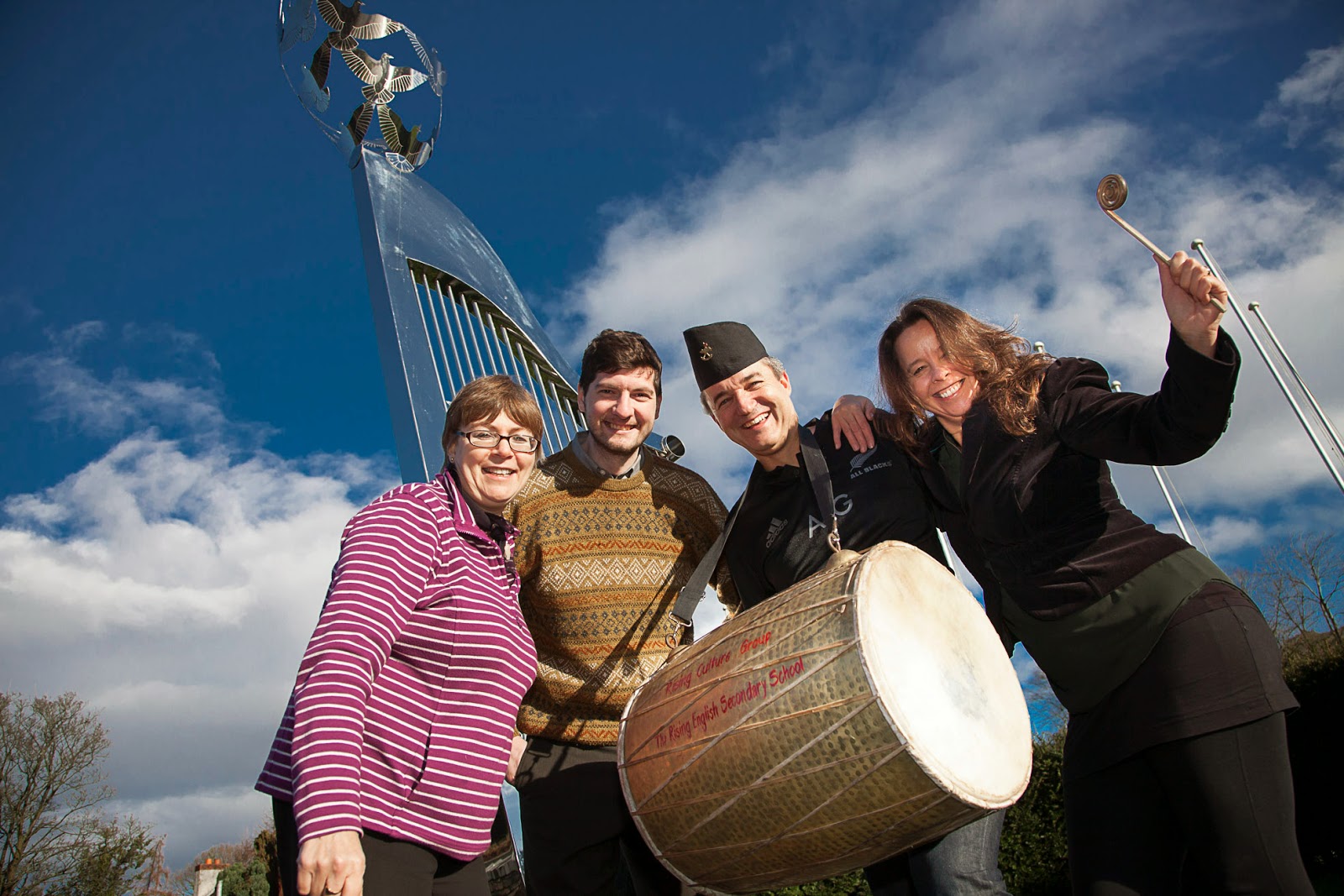 * Sue McEvoy and Ben Sawin, of Llangollen International
Musical Eisteddfod, with Todd Lochhead, from Bristol,
and his wife, Lisa.


A major operation is underway to bring a troupe of Nepalese dancers from their home in the Himalayas to Wales for next year’s Llangollen International Musical Eisteddfod.
The idea is the brainchild of Bristol man Todd Lochhead whose wife, Lisa, used to run a shop in the Denbighshire town and who has fond memories of its annual cultural spectacular.
Todd, a trained accountant originally from New Zealand, is co-ordinating the effort to fly the 34 members of the Rising Culture Group almost 5,000 miles from their base in the ancient city of Bhaktapur, less than 100 miles from Mount Everest and a dizzying 1,400 metres above sea level, to the iconic cultural festival in Denbighshire.
He has been a fan of the group’s traditional dance routines for almost 20 years and although he admits it will be a tall order to raise the estimated £40,000 necessary to pay for the trip next July, he hopes that with the help of his friends and contacts around the world and the group’s own determined fundraising efforts it will be possible.
Todd, who lives in Bristol where he works as a financial consultant, first came across the dancers when he journeyed to Nepal in 1995 to work as a teacher at the school where the group was formed.
He said: “When I went over to Nepal from New Zealand 19 years ago I noticed that everyone there seemed happy and I wanted to find out why.
“I heard about a school which had been started in Bhaktapur – it means `city of devotees’ - which is around 10 miles from the capital, Katmandu, and decided to pay a visit there.
“Called the Rising English School, it was founded by a man named Kapil Banebepali and his wife Chandika, who is now the principal, and offers lessons to children aged three to 13, many of whom would otherwise have ended up having to go out to work if they had not found some way to get into the school.
“The average wage in the area is just 300 to 400 US dollars a year and Kapil’s work with the school opened my eyes about how much can be achieved with so little.
“I took a job with him as a teacher and stayed for about a month doing all sorts of lessons including English. The following year I returned and spent another couple of months teaching there.
“It was during this time that I first saw the Rising Culture Group performing their traditional and very colourful Nepalese dance routines, the main one of which is the stunning masked dance that has its roots in Hindu culture, and thought they were just fantastic.
“The dance group was started by Kapil and is based at the school. He knew the children needed to learn about their own culture as well as getting an education and broke through lots of red tape to make it happen.”
Todd added: “As Nepal was in a state of civil war for around a decade from 1996 it wasn’t necessarily safe to go back to Bhaktapur but last October I returned there to see my friends and was invited over again to help them celebrate the school’s 25th anniversary in February.
“I saw the dance group perform on the school stage and realised they are one of the strengths of Nepalese culture.
“I remembered the Eisteddfod from the time my wife Lisa ran a small alternative clothing and accessories shop in Llangollen in the 1990s and thought it would be marvellous if the dancers had the chance to come over to Wales and perform in 2015.
“I visited the Eisteddfod office in Llangollen Pavilion a few days before the 2014 festival was held and spoke to them about registering.
“I then had lots of Skype conversations with my friends in Nepal about them competing.
“They had never heard of the Eisteddfod but I told them all about it and sent them lots of pictures and they are very keen to be involved. In fact, they told me they’d love to come to Llangollen.
“They are now hoping to compete in three sections, Children’s Folk Dance, Traditional Dance and Cultural Showcase.
“We are aiming to bring over a group of 34 people, including 20 dancers aged eight to 16, plus musicians – one of whom is a drum master in his eighties – plus a small number of people to look after the children.
“Raising the necessary funds to make the trip will obviously be difficult for them as I estimate the whole trip could cost at least £40,000 but I believe that if you don’t shoot for the stars you’ll never know. Their `can do’ attitude is exceptional and somehow we’ll make things happen.
“They’ll do their own fundraising over in Nepal and I will be asking my business contacts and friends in Bristol and around the world if they are willing to help. In my time I’ve worked in New Zealand, Australia and Amsterdam apart from in the UK.
“To get to the Eisteddfod the group will need a hand-up and not a handout and I’m sure we can do it because they have such an inspirational story. It’s my belief that culture isn’t local but trans-boundary.”
Eilir Owen Griffiths, Musical Director of the Eisteddfod, said: “This is what the Eisteddfod is all about, bringing together people from all over the world, from different cultures and backgrounds.
“It is a very inclusive and international event and what gives it its unique Welsh flavour is our tradition of friendly competition and it is wonderful that we will have dancers from Nepal competing alongside English clog-dancers, Scottish sword-dancers and others from Africa, Europe and China.”
Posted by llanblogger at 8:48 AM