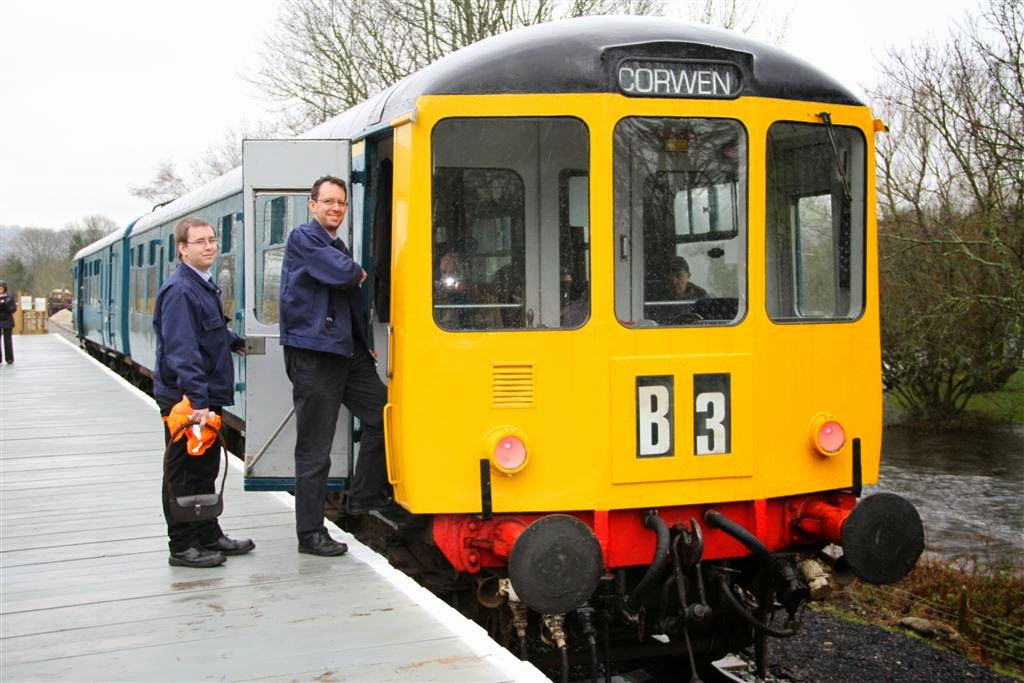 * The diesel railcar at Corwen East, crewed by Karl Latham
and John Joyce, on arrival from Llangollen.

Llangollen Railway passed another milestone in its development when it operated the first passenger service to Corwen with a diesel railcar.


Although diesel railcars were generally introduced by British Railways during the 1950s, these modern trains were never introduced on passenger services between Ruabon and Barmouth prior to closure of the line by Dr Beeching's axe in January 1965.

But the two-day Winter Warmer event staged by the heritage railway on January 2/3 offered visitors a mix of train operations with both steam and diesel hauled trains routed along the recently-opened extension to the new station at Corwen East.
The first train of the day last Friday ran from Carrog and provided a 09.30 passenger service from Corwen to Llangollen.
It made several further runs to Corwen on both days and proved popular with visitors as it allowed the route of the new extension to be seen in detail from the windows behind the driver's cab.
Services with the heritage railcar continued on Sunday as the final day of the festive season of trains.
With the line closed for essential track maintenance in January, next public train services to Corwen will operate from Saturday, February 14, prior to an official opening ceremony on March 1 - St David's Day - when VIPs will be present to unveil the station name board.
George Jones for the railway said: "This was an historic occasion and provided a service which British Railways never aspired to 50 years ago."
Posted by llanblogger at 10:37 AM