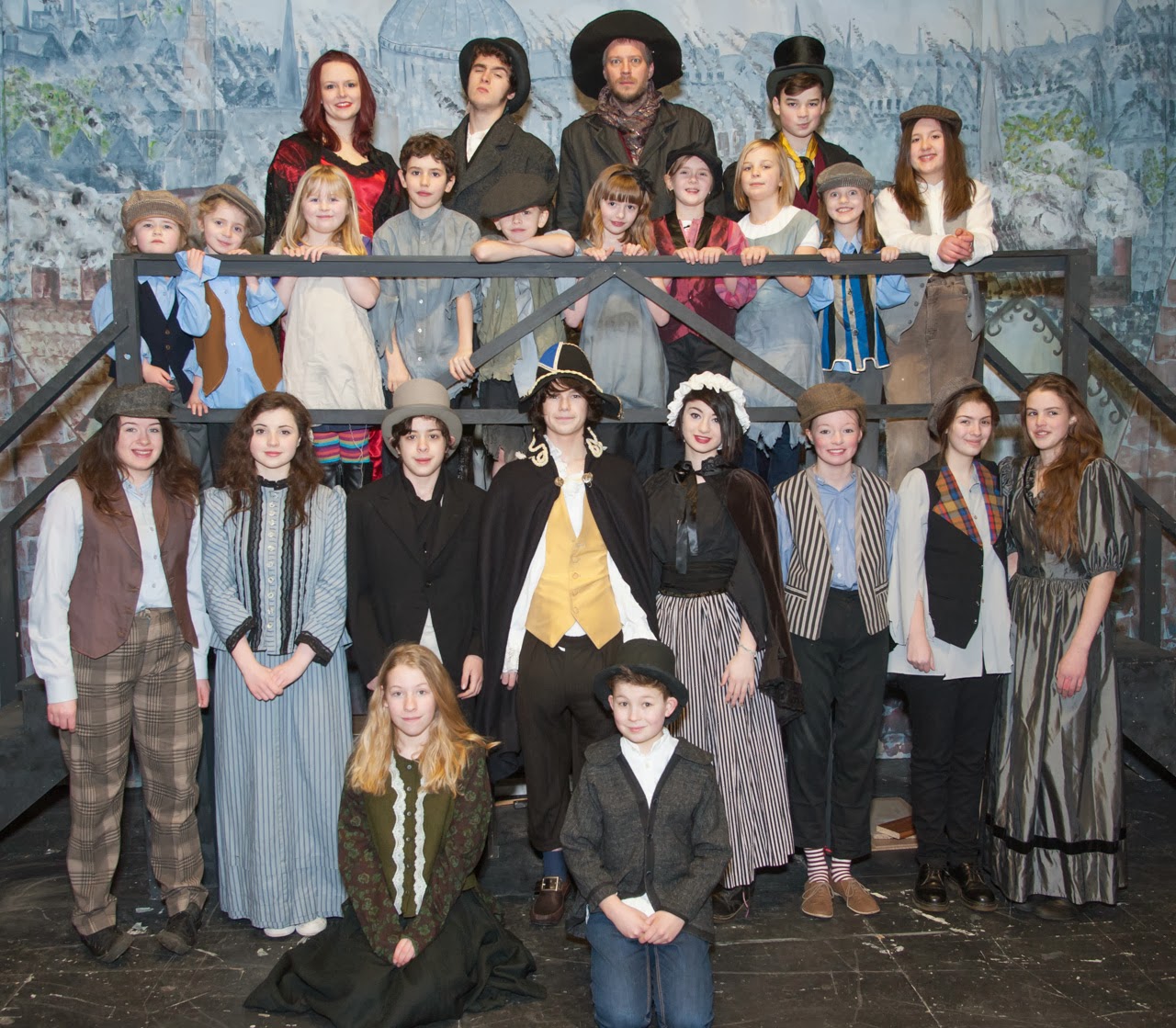 * The splendid cast of Oliver! line up.﻿

Just like the hungry little lad in the title, Llangollen Operatic Society Young ‘Uns’ production of the evergreen musical Oliver! at the Town Hall leaves the audience begging for more.

Although there are lavish helpings of top-class entertainment from start to finish, it’s hard to get enough of the mouth-watering characterisations and delicious singing from a talented cast of more than 40 youngsters.

So good is it that at times it’s difficult to believe that you’re watching kids not seasoned adults tackling the Lionel Bart masterpiece based on the Dickens’ classic Oliver Twist.

But with the notable exception of Chris Simms who is on loan from the “grown up” operatic society to lay on a marvellously mischievous Fagin, the rest of the actors are five to 18 year olds.

The acting and singing talent just keeps being served up in course after tasty course.

It’s Bumble who balls out little Oliver for daring to ask for another ladleful of gruel and didn’t the cute, curly-haired Rhys Penge as our orphaned hero receive the bad news with the perfect balance of pathos and indignation?

In fact, young Rhys goes on to shine throughout in his centrepiece role, never missing a line or a lyric and bringing a tear to many an eye as he sings the plaintive Where is Love?

At the grim funeral parlour where he flees to escape the nightmare of the workhouse, Oliver encounters the appalling Sowerberry family, headed by Will Edwards as the oily undertaker and with Megan Howlett as his overbearing wife.

Both are highly proficient in the respective parts as is Zoe Nicholas as their dopey daughter Charlotte. The two girls’ reactions as a feisty Oliver fights to get out of the coffin in which they’ve placed him and are sitting atop to keep him there for everyone’s safety is something to behold.

Another vile character Oliver meets at the undertakers is apprentice Noah Claypole and, although he doesn’t have too big a slice of the action, the part is very convincingly played by Cassius Hackforth.

Poor Oliver’s fortunes hardly improve when he hot-foots it to London after leaving the awful company of the Sowerberrys because it’s there he falls in with the worst of bad company, Fagin who heads a band of junior thieves, and arch-criminal Bill Sykes. The only saving grace is Bill’s long suffering girl and Fagin graduate Nancy.

Operatic stalwart Chris Simms gives Fagin just the right balance of villainy and humour and delights with his interpretation of Reviewing the Situation.

Sykes doesn’t work unless he’s portrayed as a thoroughly evil psychopath, and Wilf Wort does not disappoints in the part. Again, he’s only in his teens but he can certainly act and manages to send a shiver down the spine with the way he batters and eventually murders the faithful Nancy. At one point in the action he even spits at her for real, hopefully missing the excellent Joanna Stallard.

Joanna has a singular talent all of her own. Acting, singing and even dancing are clearly second nature to her and, as Nancy, she is quite simply superb.

Her powerful and deeply moving rendition of As Long As Needs Me was a show-stopper in the truest sense. She also leads the exuberant action in the drinking song Oom-Pah-Pah which is performed with such gusto by the entire cast that some of the audience would love to have got up on stage and joined in too.

Also well up there with the stars of the show is Charlie Hackforth as the Artful Dodger. He simply radiates confidence as Fagin’s cheeky chappy apprentice and reaches out over the footlights in way which belies his years.

All the supporting roles are very competently filled and when the whole cast team up for the chorus numbers it’s a colourful and melodic spectacle to remember.

Providing the backing for all this is a live four-piece orchestra skilfully led by musical director Elen Mair Roberts who also provides a mean violin solo to accompany Fagin in Reviewing the Situation.

This Oliver! – the Young ‘Uns’ 25th annual show - is a fine tribute to new artistic director Christine Dukes. She had the same role with famous Youth Theatre at the Stiwt in Rhos for 14 years, and this wealth of skills and experience shines out.

Oliver! opened on Thursday night and still has two performances to go today – a matinee at 2.30pm and the evening show at 7.30pm. Catch one of them if you can!