Sunday lunch gets its place in the Sun 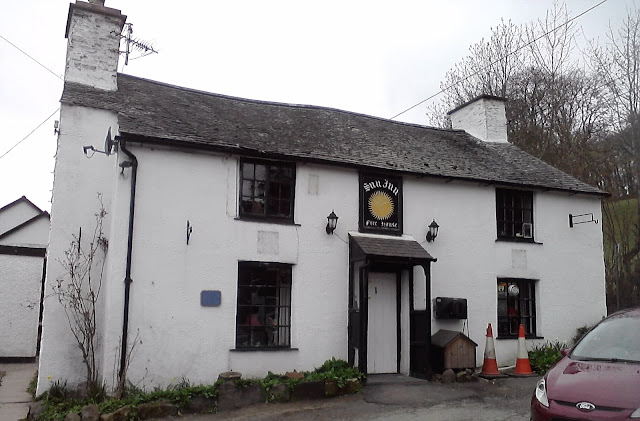 
After lying empty for a time, the historic Sun Inn at Rhewl is once again very much open for business.
And the people now in charge of the centuries-old hostelry not far out of Llangollen have obviously set out to revive its reputation as a great place to go for Sunday lunch.
llanblogger tried it out yesterday and can thoroughly recommend it as the perfect venue for a traditional roast-and-veg meal.
As anyone who has been there will know, it’s not a large establishment and lunches are served in the small front room with atmospheric low ceilings, a massive open fireplace and low, black-painted beams.
There doesn’t seem to be a menu as such but as you pass the small bar-room on the way in and express a wish to eat, a staff member rapidly follows you to one of the four dining tables and tells you what’s on offer by way of Sunday lunch.
Yesterday it was either beef or pork, both of which came with a Yorkshire pudding, roast potato, cauliflower, broccoli and diced carrots, topped off by a very nice gravy.
llanblogger’s party both opted for the roast beef, which was tender and succulent and may even have been locally sourced.
All the veg were obviously fresh and also came well cooked.
Portions were adequate rather than over-facing – which meant there was room left for dessert.
For the llanblogger duo this came in the shape of orange and lemon sponge with custard, and rhubarb crumble and custard – both delicious.
The basic roast dinner is a very reasonable £6.99 and the price of the two desserts plus a tea and a coffee brought the final bill to just £21.80 for two people – not at all bad these days, especially in a place where the surroundings are as agreeable as this.
Apart from the food, the pub also has a worthy selection of real ales on tap, including the Llangollen Brewery range of beers and the re-born Wrexham Lager.
All in all, we’d say that it’s definitely worth aiming for a place in the Sun.
Posted by llanblogger at 1:52 PM