Over 1,700 motorists from across Wales were prosecuted for not wearing a seatbelt during a multi-agency crackdown. 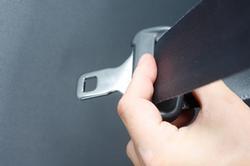 In March, North Wales Police teamed up with the other Welsh Police Forces to launch the All Wales Seatbelt Campaign, warning motorists and passengers that they are risking their lives by not wearing belts and issuing fixed penalty notices to those who choose to flout the law.

During the two-week campaign police officers detected a total of 1,775 seatbelt offences.
In North Wales 280 offenders were caught and apprehended and in the Dyfed Powys force area – who led the campaign, there were 959 offences.

In South Wales, 405 people were prosecuted, while in Gwent, there were 131 offences.

He added: “We will continue to be robust in our efforts to ensure all drivers and passengers are being safe and buckling up.”

Motorists and passengers who choose to risk their lives by not wearing a seatbelt could receive a £60 Fixed Penalty Notice or be summonsed to court where they could face fines of up to £500.

North Wales Police has a robust strategy around enforcing the ‘Fatal 5’ offences which are failing to wear a seatbelt, drink and drug driving, dangerous driving including unnecessary risk taking, speeding and using a mobile phone whilst driving.
A/Sgt Mark Jones added: “We are committed to assisting in reducing casualties on the road through the use of targeted operations around high risk groups of people and locations while enforcing the ‘Fatal 5’ offences.”
Posted by llanblogger at 2:13 PM