Scheme to protect your vehicle rolled out across region 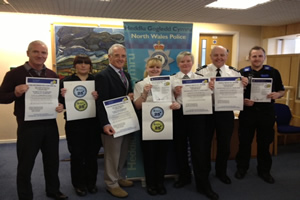 
A scheme aimed at helping to protect your vehicle from theft is being rolled out across North Wales.
The Vehicle Watch 25+ initiative has been designed as a crime preventative measure and to increase the likelihood of a stolen vehicle being spotted and stopped by the police and also acts as a deterrent for young people not to steal vehicles.
Vehicle owners over the age of 25 will be given an information pack containing specially-designed window stickers which will be attached to the front and rear windscreens of their cars. If the vehicle is then seen being driven by someone apparently under the age of 25 it may be stopped and checked by police.
PC Hazel Goss, Community Safety Officer for North Wales Police said: “Anyone over the age of 25 can join the scheme for free. It is open to all users, private and commercial. Once people have registered a Vehicle Watch pack will be sent out which will include stickers and crime prevention advice.”
“It was first launched as a pilot scheme throughout Flintshire a year ago, where in excess of 200 people have registered and to date none have been the victim of vehicle theft. We have had lots of positive feedback from the people who have joined. Other forces have also adopted the initiative.”

PC Goss added: “A lot of vehicle crime results from criminals seeing opportunities and taking them. You can easily outsmart the car thief by following the simple advice which has been provided with this scheme. Remember, most car crime can be prevented. Don’t give criminals an easy ride.”
The scheme, which is administered by the North Wales Community Safety Partnership, is free to join and motorists will receive the stickers as part of a vehicle crime prevention pack containing advice leaflets, registration letter, withdrawal letter, change of address form and other relevant information.

Registration to the scheme does not expire unless it is withdrawn or change of car ownership occurs.
If you would like to join for free, please contact PC 1409 Hazel Goss at the Flintshire Community Safety Partnership on 01352 702145 or email: hazel.goss@nthwales.pnn.police.uk

Posted by llanblogger at 7:53 AM