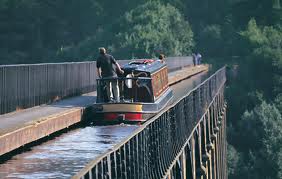 Mike Edwards, chair of Keep Llangollen, has this special report of the event he attended recently over in Fron ...

I attended a visit and learning event at Pontcysyllte Aqueduct last Friday organised by the Federation of Small Businesses.

It was an informative session initially consisting of a presentation by officers of Wrexham County Borough at the Visitor Centre at Trevor Basin. 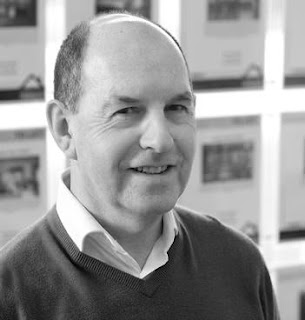 The party of 25 people mainly members of the FSB then strolled over the aqueduct on a pleasant sunny evening to the Fron Basin.

Here we visited the Fron Tea Rooms where a traditional tea of sandwiches and cakes was served.

Later we boarded a canal barge to travel back over the aqueduct with an amusing and informative commentary from Peter Jones (Jones the Boats).

Wrexham Council are strongly promoting the World Heritage Site (WHS) and other visitor attractions in the County Borough as part of their Destination Wrexham.

Following a question I posed an assurance was given that Wrexham Council were co-operating fully with Denbighshire and Shropshire Councils in relation to marketing the 11-mile long WHS Buffer Zone which stretches from Chirk to the Horseshoe Falls above Llangollen.

Members of the FSB expressed concern that the WHS was not sign-posted prominently, particularly from the A483.

It was revealed that there were complications about agreeing the signage with Local Authorities and the Highways Agency.

One member strongly criticised the Authorities for failing to come up with signage four years after World Heritage Status was granted to Pontcysyllte and Llangollen Canal.

As Chair of KLS I have arranged to meet with the FSB to ascertain what benefits they are able to small businesses in Llangollen.

Mike Edwards
Posted by llanblogger at 7:56 AM