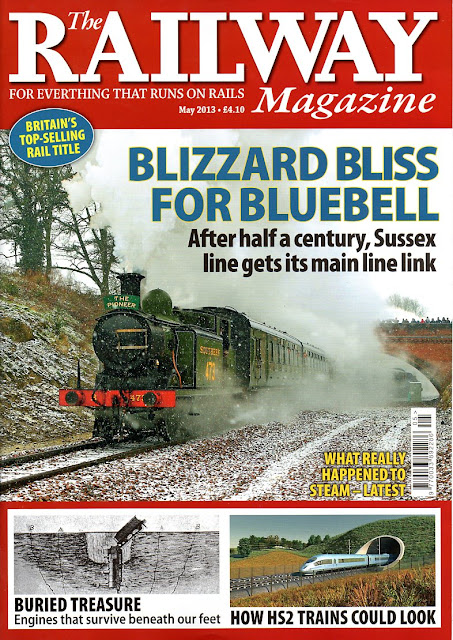 * The current edition of The Railway Magazine in
which the Corwen extension article features.
The current (May2013) edition of The Railway Magazine features a 5 page article about Llangollen Railway's plan to extend the line all the way to Corwen.
Compiled by Cliff Thomas as part of the magazine's Lazarus series - railways brought back from the dead - it looks at the recent history of the project, current status and the prospects of finishing phase 1 to Corwen East.
The article features numerous pictures of trains, mostly on the extension, as it currently exists to show what is in prospect when the line is operational on its full length.
Railway spokesman George Jones said: "Let's hope it attracts the rail fans and brings in some much needed donations to allow for completion in 2014."
Mr Jones explained that extracts from the article will be put on show as part of the Corwen exhibition in the coach at Llangollen Station.
Posted by llanblogger at 7:34 AM