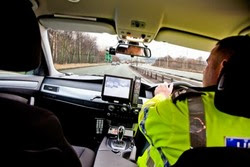 The TISPOL (European Traffic Police Network) campaign will see police forces across Europe tackling speeding by conducting random speed checks.
North Wales Police Roads Policing Officers along with Go Safe will be combining their efforts to deter and detect motorists who choose to ignore the speed limits. Drivers who are caught speeding will be issued with anything from a Fixed Penalty Ticket to a summons to attend court.
Acting Sergeant Mark Jones from North Wales Police’ Roads Policing Unit said: “We want to work with drivers and that is why we are giving advance notice of this week-long operation.
“Speeding is an issue that concerns many residents and one that we take extremely seriously.
“Those who choose to ignore the speed limits can expect to be prosecuted for their actions.”
The campaign starts shortly after North Wales Police released figures under the Freedom of Information Act highlighting some of the highest recorded speeds on roads throughout the region – which included 125mph recorded on the A5 near Corwen.
A/Sgt Jones added: “We are committed to making our roads a safer place for all who use them and we will continue to crack down on those irresponsible drivers who choose to ignore speed limits and drive irresponsibly, not only risking their own lives but the lives of others.”
North Wales Police has a robust strategy around enforcing the ‘Fatal 5’ offences which are speeding, drink and drug driving, dangerous driving including unnecessary risk taking, failing to wear a seat belt and using a mobile phone whilst driving.
Further information regarding TISPOL can be accessed via their website
.
Posted by llanblogger at 7:48 AM