North Wales Police are appealing for help in tracing a 69 year old man missing from the Trefynant Park area of Acrefair,  Wrexham.

David Clwyd Davies has not been seen since the afternoon of Saturday 6th April 2013 and a concerned neighbour made contact with police earlier today. 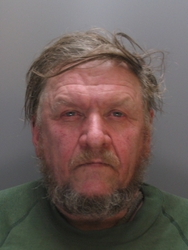 North Wales Police and the North East Wales Search and Rescue team are currently conducting enquiries in the immediate vicinity of Mr Davies’ home but they are asking the public’s help with any information on sightings.
Mr Davies (pictured right) is described as 5’ 11” tall, heavy build and sporting a thick beard.  He ordinarily wears jeans, fleece top and woolly hat and is well known in the local community.
Inspector Alan Hughes of Wrexham Police, who is coordinating the search said; “Mr Davies was due to meet up with a neighbour last Saturday and he failed to keep that appointment.
He hasn’t been seen since and this is out of character. We are concerned and are appealing for any person who has seen Mr Davies or knows of his whereabouts, to contact the police.”
Anyone with any information should contact North Wales police on 101 or alternatively Crimestoppers on 0800555111.
Posted by llanblogger at 3:28 PM