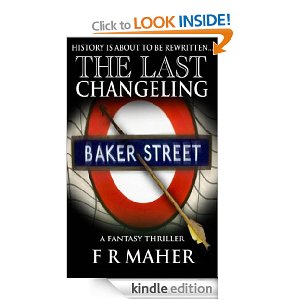 Llangollen features prominently in a new e-book in which the villains are a breed of malevolent fairies intent on world domination.


And its author has explained how the idea for the fantasy thriller The Last Changeling came to her in a dream.


Fiona Maher, who writes under the name of F R Maher, said: “We’ve had wizards and vampires, and I wondered what other supernatural beings would appeal to readers.


“After a dream, I came up with the idea that it would be fairies - not the cutesy pink confections of modern cartoons, but the ancient malign creatures that haunted the forests, and stole children.


“I called them metahominids - literally 'other men' - and I ask what if population pressure meant they started moving out of the country, and began invading our city spaces, like urban foxes?


“What if we've been at war with them for centuries and the evidence was all around us?


“If myxamatosis hadn't been developed for rabbits, but to spray on the barrows, the metahominid strongholds?”


Hero of the book is a young policeman named Watkin who gets caught up in a battle between a secret government department and metahominids in Kew Gardens.


In the melee, he is injured, and believes he has been involved in a UFO incident.


However much he tries to find out what really happened, the government organisation, D9, evades all of his investigations.


Dispirited, he gives up that line of research, and returns to his interest in UFOs.


Watkin travels up from London to investigate the Beings of Bodfari, a legend that has been linked to UFO activity.


En route, he stops off in Llangollen of which the author gives a vivid description taking in a number of well-known local sights and businesses such as Dinas Bran Castle, the Corn Mill, the station, the florists in Oak Steet and the Watkin Williams store in Regent Street.


Coincidentally in Llangollen at the same time as Watkin is a D9 operative, travelling under the name of Sarah Deakin.


Her weapon of choice is a meaty survival knife, which she has brought to Llangollen to have its edges laced with silver - a lethal metal to all metahominids – at a local jewellers shop.

The author knows Llangollen well because although she lives on the Wirral, she works in the town and has been associated with the area for the past 30 years.