Loco restoration is a family affair 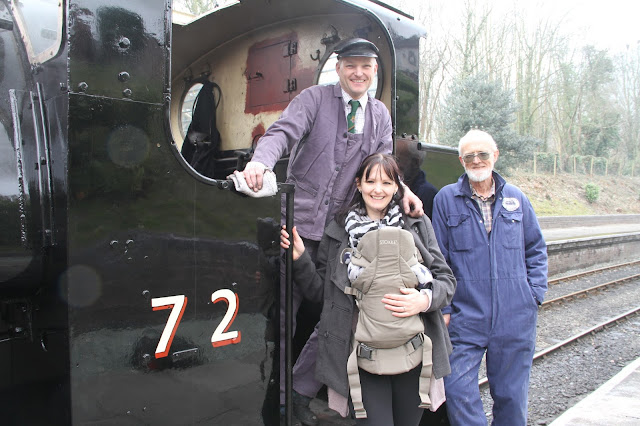 * The Hymas family group with No.72 at Llangollen. 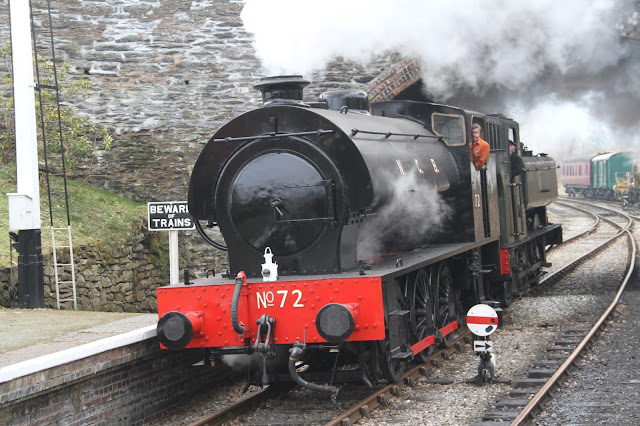 * The engine on arrival at Carrog later.
Three generations of an Essex family came together to celebrate the successful completion of a steam locomotive restoration project at Llangollen Railway.

James Hymas, 42, was joined by his partner Bobby and their eight-week-old baby son, Tristram, and father Dick to see their other pride and joy, No.72, a six wheel saddle tank steam engine, back in operation after a nine-year personal project to restore it from scrapyard condition.
After No.72 successfully took the 1pm train from Llangollen down the Dee Valley line to Carrog and back an ecstatic James said: "That was terrific! For the engine to be able work its first ever passenger train in its entire career was worth all the time and effort involved in its restoration."
Father, Dick, who now lives in Penrhyndeudraeth, and who originally bought the engine from the scrapman at South Hetton Colliery in Northumberland in 1973, said: " It is fantastic to see the engine back in working condition. When I bought the engine it had been literally run into the ground by the National Coal Board.
"Everything possible on it was worn out and its restoration was going to be a big challenge when I took it to the Colne Valley Railway in Essex."
That challenge was taken on by his son James in 2004 when he set about rebuilding the mechanical parts, renewing the smokebox and bunker and arranging for a boiler repair.
Seeking expert help and advice he brought the kit of parts to Llangollen in 2006.
This move allowed a difficult task to be brought to a successful conclusion earlier this week when the locomotive in a smart black NCB livery as No.72  had a steam test and then ran with a service train.
James said: "The engine is the last known example of the wartime Austerity type built at the Vulcan Foundry, Newton-le-Willows in 1945, as part of an order for the British Army and was delivered to the Longmoor Military Railway in Hampshire.
"However, it was sold on to the National Coal Board for work hauling heavy coal trains in the Northumbrian coal field, a task for which it was well suited."
Dave Owen, chief engineer at Llangollen Railway, said: "No.72 is a powerful locomotive and performed well on its two trips down the line.
"It is always satisfying to see a steam locomotive come back into service after a long restoration job and we are pleased to have played a part in ensuring that the ambitions of Dick and James have been finally fulfilled here at Llangollen."
George Jones, press officer for Llangollen Railway,  said: "During the trip down the line the steam train attracted the attention of two Army Air Corps helicopters on low level flying exercises.
"They came past for a close look and it seems incredible that they unwittingly acknowledged the special occasion for a former British Army locomotive!
"Their interest in the occasion was enjoyed by all."
Posted by llanblogger at 8:11 AM