An operation which is aimed at reducing motorcycle related deaths and serious injuries on the roads of North Wales is being launched this weekend to coincide with its 10th anniversary.

And one of the roads it will focus on is the A5.

Launched in 2003, the annual Operation Focus will run from early April until early autumn and will see police officers out and about stopping and talking to bikers to educate them about the dangers, and to also prosecute those who ride dangerously. 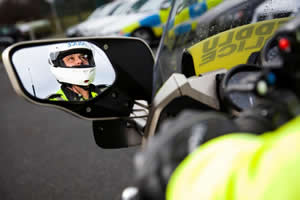 Historically high numbers of motorcyclists descend on North Wales due to the challenging nature of the roads in areas of outstanding natural beauty such as Snowdonia.
Motorcyclists are more at risk of being killed or seriously injured in a road traffic collision than any other road user, representing 1% of road traffic but accounting for 18% of all fatalities.
During 2012 there were a total of 63 serious collisions involving motorcyclists with a notable increase in the number of riders from outside the Force area.
Officers hope to reduce this figure by encouraging riders to take responsibility for their safety and the safety of other road users.
Police will patrol the roads where collisions are most common, which include the A494, A5104, A5, A470 and the A487.
Throughout the operation Bikesafe representatives will also be out and about speaking to riders and promoting the Bikesafe initiative, which offer free workshops in North Wales (subject to booking fee).
Chief Inspector Darren Wareing, who is in charge of North Wales Police’ Roads Policing Unit said: “Operation Focus is one of many campaigns and initiatives that we run throughout the year targeting high-risk road users. It is not about alienating the motorcycling community – it is about education and enforcement.
“Whilst the vast majority of motorcyclists ride appropriately, some riders choose to use the roads as a racetrack, committing serious breaches of road safety legislation, such as speeding and riding dangerously thereby putting themselves and other road users at risk of death or life changing injury.”
“We are committed to keeping people safe on the roads of North Wales. This isn’t about catching bikers out, we want them to enjoy the roads but most of all we want them to ride safely and responsibly.
“Responsible riders are welcome to visit the area and take in the stunning scenery and landscape, but even they face risk of death or serious injury by underestimating the risk posed by fatigue brought on by a combination of driving long distances and concentrating on navigating challenging and unfamiliar routes.
“I would also urge bikers to take the opportunity to enhance their skills through training and attend the free Bikesafe workshops. Bikesafe is an accredited scheme which is run nationally by police forces which aims to reduce motorcycling casualties.
He added: “We will continue to target, with a view to prosecution, all those that ride or drive dangerously, at excess speed, overtake on solid white lines or commit any other road traffic offences.”
The operation is expected to run from Easter through to early October.
Further details regarding the free Bikesafe workshops are available via the Bikesafe website