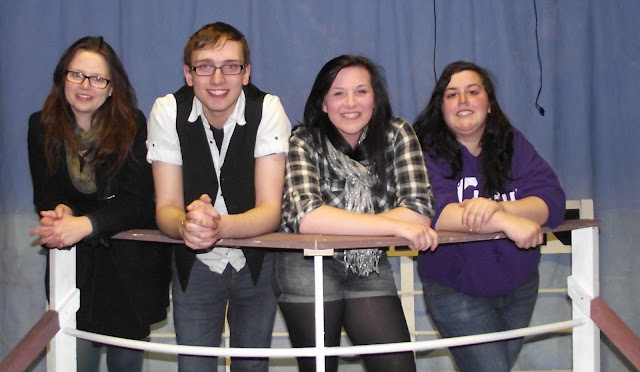 * From left, Joanna Stallard, George Nelson, Laura Halliwell and Danielle Short.
LLANGOLLEN  Operatic Society has become a real hot-house for nurturing new theatrical talent.
A host of young members, past and present, have either already embarked on stage careers or are planning a future in the performing arts.
A magnificent seven rising young stars are appearing in the society’s latest production, the Cole Porter evergreen Anything Goes, which hits the stage for a five-night run at Llangollen Town Hall on Tuesday, April 16.
They are all studying performing arts at A Level or aiming to take the subject next year.

Laura Halliwell, who joined the society this year, is studying IT at Yale College in Wrexham but is applying to do the BTEC in Performing Arts next year.

Luke Meyers, who also joined the society this year, is studying for the BTEC in Performing Arts at Yale and aiming to go on to take the same subject at university next year.
He was part of the chorus in the debut of new musical entitled Ruby and the 13th Door performed by The Magical Opera Company in York last December.
Luke also performed with the Llangollen 20 Club in its recent production of Fawlty Towers.

Appearing alongside Luke in York was another Llangollen newcomer George Nelson who is also studying for the BTEC in Performing Arts at Yale.
George is looking to get some acting work next year before deciding whether to go on to further study.
Elysha Cookson, who was previously part of Llangollen’s junior stage group,  the Young ‘Uns, is currently studying for A Levels including drama at Ysgol Dinas Bran and hoping to go on to study it at Warwick University next year.

Joanna Stallard, who also cut her dramatic teeth in the Young ‘Uns, is taking A Levels including drama at Dinas Bran this year and also considering it as a possibility for university in two years.

Danielle Short is studying A Level Drama at Dinas Bran and hoping to go on to study Theatre at Derby University next year.

Aaron Davies has landed a place at the prestigious Central School of Speech and Drama in London to study Muscial Theatre next year.
He recently appeared in Llangollen 20 Club’s production of The Glass Menagerie.
Among the former society members who have moved on to become professional performers is Matthew Quinn who gained a first class degree in Performing Arts at the Liverpool Institute for Performing Arts and is currently playing Mike in new musical Carnaby Street after appearing in a number of professional productions such as Dreamboats and Petticoats and The Rocky Horror Show.
Ceri-Lyn Cissone moved on from Llangollen Operatic Society to appear in the Merry Wives of Windsor at Shakespeare’s Globe Theatre.


A fine singer, she has also featured as a soloist in A Night of 1000 Voices at the Royal Albert Hall in London.


Chrissie Ashworth, who is producing the society’s production of Anything Goes later this month, said: “Our society is a real hothouse for bringing on top-class stage talent of the future.


“Many of our past young members have gone on to carve out professional careers for themselves and some of the large number of youngsters we have with us at the moment look set to do the same thing.


“It’s fantastic to think that an initial grounding with the society has produced so many potential stars of tomorrow.”


Tickets for Anything Goes, priced at £9 and £7.50 concessions, are available from Llangollen Tourist Information Centre, or Gwyn's the Butchers in Castle Street.
Posted by llanblogger at 8:00 AM