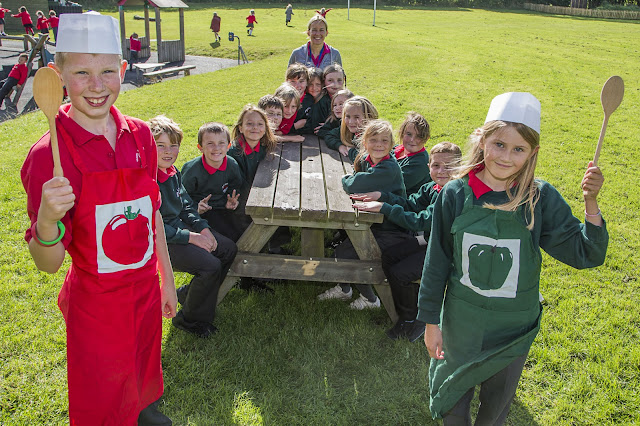 Schoolchildren are learning all about healthy eating as they get ready to take part in an annual food fiesta, Hamper Llangollen 2012.
The Llangollen Food Festival takes place on Saturday and Sunday, October 20 and 21, but earlier that week, on Tuesday, October 16, there is a special all-day children’s event at the festival site at the International Eisteddfod Pavilion.
It will see 150 Year Five and Six children from seven local primary schools enjoying workshops ranging from the best drinks and foods for sportsmen and women to nutrition to preparing, cooking and eating a meal as well as instruction on sausage-making and bee-keeping.
The festival is supported by rural regeneration agency Cadwyn Clwyd through the Rural Development Fund for Wales 2007-2013, funded by the European Agricultural Fund for Rural Development (EAFRD) and the Welsh Government.
Robert Price, Cadwyn Clwyd Agri-Food Project Officer, said: “It’s really important to involve young people in the festival so they can learn about how food is produced and about the importance of a good diet.
“The work being done in schools by Paula and her colleagues is vital and they make the business of food, health and nutrition fun while still getting their message across to the children.”
This year’s Hamper Llangollen will also feature three of Wales’s top chefs, Graham Tinsley, the star of ITV’s Taste the Nation and a former captain of the Welsh Culinary Team, S4C favourite Dudley Newberry and the ever popular Dai Chef, who is returning to the event after an absence of several years.
Schools involvement in the event has been a regular feature, according to Denbighshire Healthy Schools Co-ordinator Paula Roberts who has been at one nof the participating schools, Ysgol Y Gwernant, in Llangollen, this week.
Paula, who works with all Denbighshire’s primary and secondary schools, said:“The school has just passed the third stage of the Welsh network of Healthy Schools Scheme and is very committed to the project and the food festival fits in very well with the scheme.
“Health and well-being are very important and all the schools involved are fully signed up to the scheme and it’s a lot of fun as well and the pupils learn about how to prepare a nutritious meal.
“Children who have school meals every day will get 30 per cent of their nutrition from those meals and school cooks also work very hard to make sure they provide tasty and nutritious menus.”
Ysgol Y Gwernant Cook Joy Pingram said: “We provide a full range of meals for the children including vegetarian and salad options and they really enjoy them and all the menus are very carefully worked out.
“We have a School Nutrition Action group or Snac, with a pupils from each year and staff members and they talk about the food and give us ideas about what they would like to try.
“It’s not chips with everything and they are very good for trying different foods and we even had a competition to design a healthy meal and we cooked it and served it to the whole school.”
Ten-year-old Tomas Griffiths said: “I like cooking at home, especially chocolate brownies but I don’t think they’re very healthy.”
Courtney Phillips, nine, said: “I like pizzas and salads and the lasagne we had in school this week. I’d like to learn how to cook it.”
Robert Price added: “In addition to many favourites, we have lots of new food producers wanting to come this year.
“Thanks to a whole host of indigenous companies, North East Wales is rapidly establishing a reputation as a centre of excellence for high quality cuisine.
“The food festival is a perfect shop window for the companies who form the backbone of our rural economy.
“The location of the Pavilion is absolutely spectacular – I can’t imagine that any other food festival in the UK has a more beautiful setting.”
Posted by llanblogger at 9:02 AM