Llangollen Civic Society, which organised the special event, has thanked all those who took part in Open Doors 2012 last weekend.


The aim was to throw the spotlight on the area’s hidden historic gems, including the Chain Bridge, Valle Crucis Abbey, Plas Newydd, Y Capel, Castell Dinas Bran and local churches. 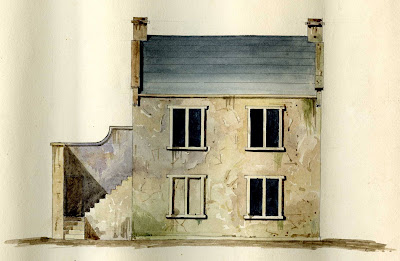 * An 1835 architect’s drawing of the Old Lock Up.
Members of the public were invited to view and be briefed on the history of these locations over Saturday and Sunday.
A spokesman for the Civic Society said: “We would like to thank all those who took part, from those who opened their doors to the public, those who helped man the buildings and exhibitions and those who led walks and gave talks.
“This year was another successful year, in some cases attendances were disappointingly lower than last year, but some newer exhibits were very popular.”
One exhibit which was attracted a lot of visitors was the Old Lock Up, or Armoury, on Victoria Square.
Since being acquired by Sue Hargreaves the old building has been transformed to more like it would have been when it was first built in 1835.
She also mounted a display showing the history of the building, from its original architect’s drawings, subsequent changes and uses.
She was ably assisted by an “old lag” in the cell, convincingly played by Mike Law.
For those of you who missed the event Sue will be opening the building for Hanes on Monday 25th of September – minus a prisoner in the cell.
The exhibitions in the Town Hall included a display on the history of the Chain Bridge, and the status of the restoration project.
Lorna Jenner is anxious for local people to contribute their memories of the bridge and any information they can give about its history.
For those of you who missed it the exhibition will be at the Chain Bridge Hotel until 3rd October, where there is also an exhibition by the Institute of Civil Engineers, called “Web of Iron” which celebrates the history of suspension bridges, and features our own Chain Bridge. 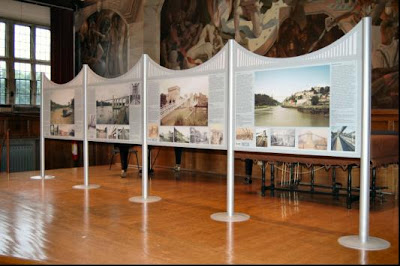