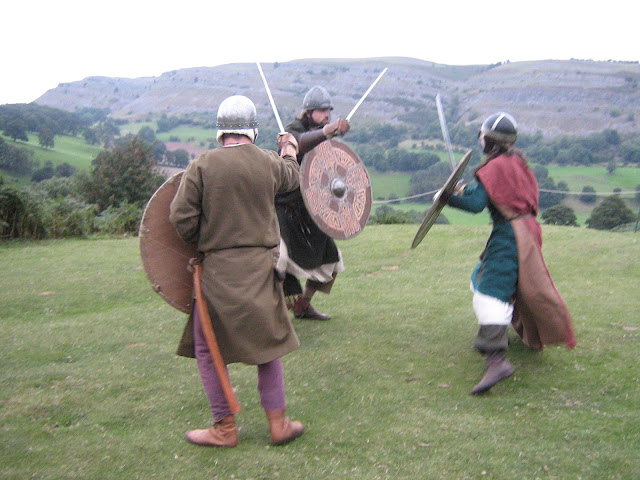 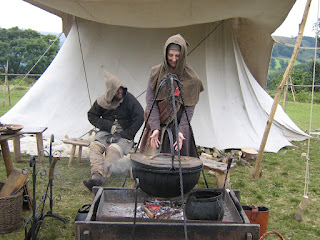 * Group members known as Llewellyn,
front, and
Killi, seated, prepare a meal on an open
fire at the encampment. 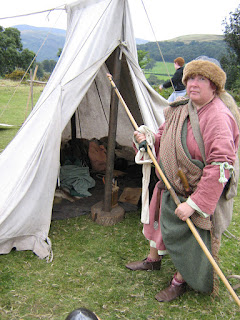 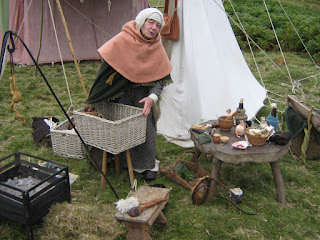 * Helen of Antioch busy outside her tent. 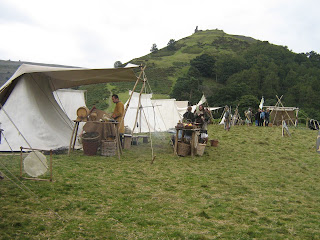 * The 12th century encampment in the
shadow of of Castell Dinas Bran.
MORE than 500 people stepped back in time to sample Welsh life 800 years ago in Llangollen over the weekend.
Medieval re-enactment group Cwmwd Iâl were camped just below Castell Dinas Brân, on the area known locally as the Pancake, on Saturday and Sunday.
The North East Wales-based group  were there to depict life as it was in the year 1165 on the day before the legendary Battle of Crogen, which was fought in the nearby Ceiriog Valley between an alliance of Welsh princes and the forces of King Henry II of England.
Although outnumbered, the ambush tactics and valour of the Welsh aided them in their defeat of King Henry's army.
Visitors were able to find out about the sort of things the Welsh fighters ate, their clothes, healing and warfare techniques as well as watch set-piece battles on the hillside.
About 30 re-enactors, all wearing authentic clothing of the period, set up camp in the shadow of the castle with linen tents and cooking fires.
About 10 of them were hardy enough to spend two nights in the tents.
All group members insist on using their 12th century names, and one of those who slept in the encampment, known as Llwyd ap Tegid, said: “It was very chilly but once you get settled in your animal furs and cloaks it’s quite cosy.”
Another group member with a story to tell was a lady known as Helen of Antioch.
Keeping in character, she said: “My brother had been fighting in the Crusades and was wounded.
“I went out there to look after him but he died, so I had his body boiled in vinegar so I could bring the bones back home with me to Wales.”
A group spokeswoman  known as Heulwen said: “It has been a very successful weekend.
“We set up our encampment and demonstrated  a range of activities for people who came to see us.
“On our open fires we cooked rabbit stew and pheasant.
“We have also had a number of skirmishes to show fighting techniques of the period.
“We have also been teaching young visitors to our camp to fight with wooden swords and sticks, which they enjoyed very much.”
She added: “Over the weekend we must have had a total of about 500 people coming to see us.”
The event was organised by Denbighshire’s Countryside team.
A modern marquee housed fun children’s activities and information about the local area, part of the Clwydian Range and Dee Valley Area of Outstanding Natural Beauty and close to a World Heritage Site.
There were walks up to the castle from The Pancake throughout the day.
A special bus service ran between the town and the encampment.
Posted by llanblogger at 9:11 AM