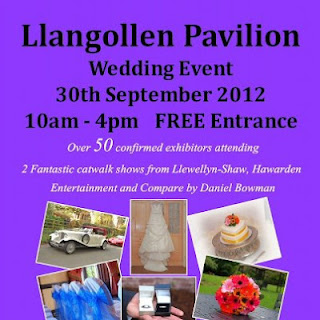 The organiser of a wedding fayre  at Llangollen Pavilion on Saturday (September 30) is asking the public to help track down the “lowlife” who stole three large banners advertising the event, which aims to raise cash for charity.


Graham Jones, who runs Wrexham Wedding Directory, told llanblogger:  “We supplied  the banners, two of which were 12ft by 3ft, at the Llangollen Pavilion event last week advertising our wedding fayre on the Saturday.
“This will have a giant charity raffle for Hope House Hospices.
“Now some lowlife  has stolen the banners.
“We are now in contact with Denbighshire Council and local police.
“Let’s hope they have been captured on CCTV … scum!”
Graham, who is based in Wrexham, added:  “The council are at a loss to what has happened as this have never happened before.
“The Pavilion confirmed yesterday that the banners were put up the strong cable ties and they have all been cut away to remove the banners.
“One banner was placed over 10ft off the ground, so someone needed a step ladder to remove it.
“Could you please ask your readers if they have seen anything. Ladders would have been needed to cut down the banner over the walkway.
“They were in place last Friday evening, but not there this morning (Tuesday).
A spokesperson for Denbighshire County Council, which runs the pavilion, said: "We are aware of the thefts and the police are involved."
·         Graham Jones can be contacted on 01691 773587 or via his website at www.wrexhamweddingdirectory.co.uk

Posted by llanblogger at 8:33 AM