Searching for furry hunters of the night

AROUND 40 people went batty in a famous Llangollen beauty spot on Friday evening.
But there was no need to call out the emergency services for they had gathered in the picturesque grounds of the Plas Newydd stately home to track the progress of some of its most fascinating nocturnal inhabitants – bats.
The quest to find the small furry flying mammals was arranged as part of a rolling programme of nature expeditions by the Area of Outstanding Natural Beauty (AONB) team in conjunction with Denbighshire County Council.
The people who turned up for the after-dark safari were mainly family groups, including lots of adventure-hungry kids.
And they weren’t disappointed because after spending about an hour in the estate’s Y Caban exhibition suite making their own paper and wood bats and colouring in pictures of the mysterious wee beasties under the direction of AONB team members Rhun Jones and Ros Stockdale – Denbighshire’s very own batman and batwoman – it was out into the grounds to seek out these enigmatic and much-maligned creatures.
Although their reputation might have suffered from their cinematic associations with vampires and other nasties of the night, bats are actually warm-blooded, family-conscious little animals –the only mammals that can fly – which spend their lives minding their own business looking for the food they love, which is insects rather than the blood of innocent human victims.
But if you’re an insect, particularly something like a midge, watch out because one hungry pipistrelle bat – one of the most common species in the UK - can eat up to 3,000 of you in a single night.

The image of bats as big as birds flapping in menacingly to syphon off your blood is also so much hokum as they are really quite tiny.

In fact, according to Rhun Jones, an old saying is that you can fit about 100 of them into a pint glass and that one is small enough to squeeze through a keyhole.
What makes them look menacingly big is their large wings.
Seeing them swoop down on their insect prey can also make people feel uneasy.
But they are not – repeat not –aiming for you!
Before the bat-hunters went out into the grounds of Plas Newydd as dusk descended – the creatures’ favourite hunting time – Rhun checked out likely areas to spot them.
Favourite location, he reckoned, was the gable end of the café where he had observed a large concentration of bat droppings near the light fitting above the emergency exit.
So that’s where the group went first, equipped with torches and bat detectors – sensitive hand-held instruments about the size of an old-fashioned mobile phone that can pick up and amplify the sounds bats make as they home in on their prey.
And here’s another fascinating fact about bats – they use their own form of radar to seek out the insects they feed on.
It’s called echolocation and means that as they fly they make shouting sounds.
The returning echoes from these shouts provide them with information about anything that is ahead of them, including the size and shape of an insect and which way it is flying.
These shouts – subtly different with each species of bat – are much too high-pitched to be heard by the human ear but they can be picked up by a bat detector set to the correct electronic frequency - in the case of the common pipistrelle between 40 and 55 kilohertz.
Our bat-hunters spent quite some time pointing their detectors at the gable end of the café but picked up only about a handful of recognition signals – represented by a rapid clickety-click sound from the device.
So Rhun suggested it might be more profitable to go down into the woodland area known as the Dell behind the main house.
He was right, because in seconds of the group arriving under a canopy of tall trees in the middle of the wooded area the detectors were going crazy, with the presence of bat after bat being recorded.
The children in the group were delighted and there were squeals of joy at each clickety-click which screamed from their detectors.
Result!
It had been a great and productive night, both for the bats who had had their fill of insects and for the bat-hunters who had so clerarly heard them doing it.
Only the midges had lost out and not a single drop of human blood had been drunk. 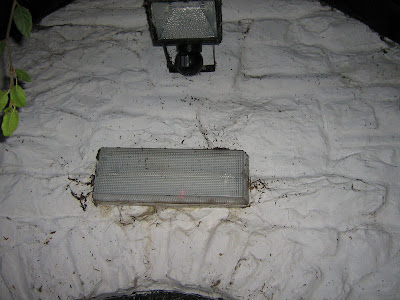 * Tell-tale bat droppings around the light
outside the café area at Plas Newydd. 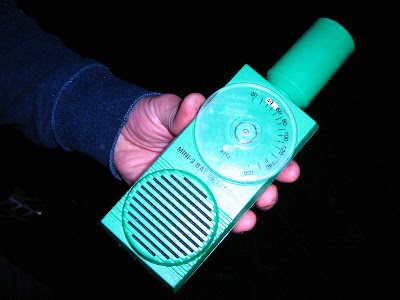 * One of the highly sensitive bat detectors
is held up for inspection by Ruhn Jones.
. 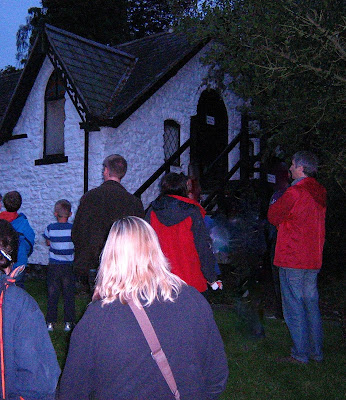 * Intrepid bat hunters wait for signs
of the tiny flying beats outside the café. 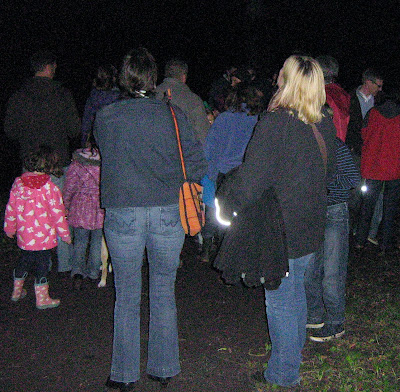 * Night-time observers watch frenetic
bat activity in the treetops above the Dell.
Posted by llanblogger at 8:21 AM