Santa is going to be busier than ever when he flies into Llangollen Station this year.


Because the grand old man will be hosting 11 days of Santa Trains on weekends from December 1s right through until Christmas Eve on December 24.
That’s a frantic four trains a day or a total of 44 for the entire Christmas season.
Festive travellers can join Santa and his elves aboard the steam Specials as they set out from Llangollen Station to head through the beautiful Dee Valley on a crisp winter’s day towards Carrog Station, which will be temporarily renamed Lapland to make Santa and his retinue feel at home. 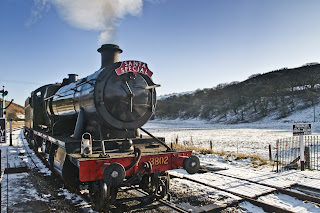 There will plenty of opportunities for travellers to have their photograph taken with Santa and the elves on his sleigh.
Each boy and girl climbing aboard the trains will receive a special gift and accompanying adults be given a mince pie and some mulled wine.
Tickets are £14 with under-ones travelling free.
Santa Special timetable: